Accidental and incidental can both mean "something happening by chance," but usage suggests that "accidental" also implies an element of carelessness or inattention while "incidental" implies the occurrence would have happened with or without attention or care.

The words accident and incident are often confused, and for good reason. They have intersecting histories, both stemming from the same ultimate Latin root, cadere, meaning “to fall," and their Latin antecedents had similar meanings: accidere meant, among other things, “to fall down” and “to happen” and incidere meant “to fall into” and (also) “to happen.” Plus, they kind of sound alike. 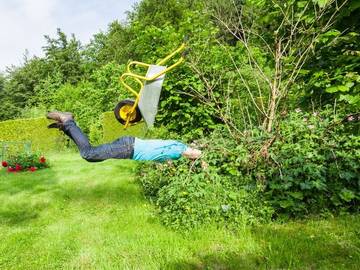 Ted's wheelbarrow accident was quite a memorable incident.

Shared Origins of Accidental an Incidental

Both accident and incident were formed from the present participles of the Latin verbs (they could be roughly translated as “accidenting” and “incidenting”), which became nouns in French before crossing into English in the 14th century. The Germanic equivalent to “accidenting” would be befalling, which gives us some perspective on how to understand the original meaning of accident: the verb befall is defined as “to happen especially as if by fate,” and the obsolete noun befall is defined in the Oxford English Dictionary as “a case, circumstance, incident, accident.” The oldest meanings of accident are “a chance event” or “something that was unforeseen and unplanned”—which could also be described as “a happening” or “a befalling.”

Accident and incident share the idea of a sudden and unpleasant occurrence, the former usually referring directly to something that causes damage or injury, the latter referring to a specific moment or instance of unpleasantness or unlawfulness:

The words next go their separate ways. Incident becomes more abstract in the language of diplomacy, referring to something likely to have diplomatic consequences:

Accident has a distinct abstract sense referring to any fortuitous or nonessential property, fact, or circumstance:

an accident of birth

Among its more concrete set of meanings is the all-too-concrete euphemistic use when referring to the acts of babies and pets:

The puppy had an accident on the floor.

Their related adjectives pretty much stay in their lanes: accidental refers to something happening by chance (chance another word that descends from cadere), but also sometimes implying inattention or carelessness:

the timing was accidental

Incidental means “minor” or, when it means “by chance” or “without intention or calculation,” the idea of carelessness is absent. (Incident is also sometimes used as an adjective in technical or legal contexts.)

Language sometimes evolves in unpredictable and illogical ways. The parallel noun forms incidence and accidence have very imbalanced comparative usage, with incidence a fairly common word meaning “an occurrence or rate of occurrence” (as in “a high incidence of crime”) and accidence a rare one, referring only to “a part of grammar that deals with inflections.”

So it might be said that all those irregular verb tenses that require memorization when studying a new language are the “unforeseen or unplanned” changes in a language's course—accidents along the way in the history of a language.