One of the responsibilities of a dictionary, although some people might very much wish it were otherwise, is to record and define new words that have entered a language. In some cases this will apply to a word which has hitherto not been used in any significant sense (see aquafaba). In many other cases, however, dictionaries are instead focusing on the new sense of an already existing word. Like social.

A7. Definitely. Social is how we consume news, ads, content, entertainment nowadays. cannot ignore it. #SocialROI

In the above example, social functions as an abbreviated form of social media. Social had been in use for a considerable length of time before it was appropriated by Silicon Valley Whippersnappers, so let's have a look at this word's vicissitudes. 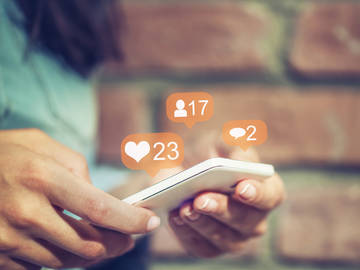 How did anyone ever measure social approval before the "like" button?

Social invited itself into our language in the 14th century, and may be traced before that to the Latin socialis, which comes from socius, meaning "companion, ally, associate." In its initial use in English the word functioned solely as an adjective meaning "involving allies or confederates." By the 16th century this adjective had broadened, and taken on additional meanings, such as "sociable."

At the beginning of the 17th century we see the first uses of social as a noun, defined (along with sociable) in Robert Cawdrey's 1604 A Table Alphabeticall, as "fellowe like, one that wil keepe company, or one with whom a man may easily keepe company." This sense is now exceedingly rare, and is found only in historical reference works such as the Oxford English Dictionary (which also includes the even rarer feminine variant socia, which they define as "a female friend or companion").

Sociable and social were synonymous in settings outside of Cawdrey's 1604 dictionary, as both words may be used to refer to "an informal social gathering." Sociable took on this meaning first, in the middle of the 18th century, although it did not become particularly common for some decades.

And the sociables, parties and balls,
Where bright eyes were cheerily glancing,
I must change for unwelcome calls,
And set the round rhinos a dancing.
—J. G. L., American Traveler (Boston, MA), 4 Apr. 1828

There is trouble between the pupils of the Waltham High School and Principal, Wilson R. Butler, because Mr. Butler has placed a veto on the holding of any more class sociables or the playing of any more foot ball games.
—Boston Daily Journal, 20 Nov. 1896

In the middle of the 19th century we find social begin to be used in the same sense.

73 Bleecker Street—Grand opening of Professor Saracco’s Apollinea—morning, afternoon and evening. Lessons at his new private and elegant rooms. Fashionable socials every evening, from 8 to 11 o’clock, with full band and ladies.
—The New York Herald (advt), 15 Sept. 1856

Social has been used as an abbreviation of several other compound nouns, such as Social Security number. The sense that we are concerned with here, however, is the shortened form of social media. We define social media as "forms of electronic communication (such as websites for social networking and microblogging) through which users create online communities to share information, ideas, personal messages, and other content (such as videos)." It is, however, worth noting that this word was in use before the Internet took off, largely in matters relating to the Catholic church.

In 1963 a council at Vatican II released a decree titled Inter Mirifica, dealing with the church's position on the media of social communications. As a result of this decree we have a good deal of written evidence of social media being used from the 1960s onward.

Sister Mary Edward, the former Josephine Ann Adint, daughter of Mr. and Mrs. William E. Adint of Pomfret, recently pronounced her first vows in the Daughters of St. Paul, a missionary congregation dedicated to the apostolate of the social media of communication.
The Hartford Courant, 26 Jun. 1966

Their work is with the social media of communication – press, radio, TV and movies. The Book Centers are furnished with a wide variety of Catholic publications, film strips and 16mm film, in 13 other cities throughout the country.
The Philadelphia Tribune, 27 Jan. 1970

We begin to see social media being used in direct reference to online communities in the 1990s. The word appears to still be in a state of flux, shifting from referencing something as broad as "stuff you can find on the Internet" to increasingly specific subjects such as the manner in which a business or organization attracts and interacts with users through electronic means.

What attracted librarians to the Internet? For some cybernauts, USENET, IRC, and other social media of the net are the hooks. For others, the millions of software programs and text files easily accessible with anonymous FTP are the important part. But I suspect that for information junkies, the ability to connect to catalogs and databases around the globe with the simple telnet command is what first attracted many.
Greg Notess. Online, Jan. 1994

This new sense of social ("social media") went from adjective to noun, but is now also being used in an attributive sense, meaning that while it technically may be a noun it is functioning as an adjective. An example of this is social manager, designating a manager who deals with or manages the responsibilities of social media.

Oh look another social manager made a blunder
Wonder if them looking a new manager now?

For some the fact that our language is in a perpetual state of change is cause for alarm. For others (including lexicographers) this constant mutability is cause for celebration, as semantic drift and functional shift are signs of a healthy language.