You may never look at a can of chickpeas the same way again.

Constraints spur innovation like nothing else. Not a bird, but want to fly? Orville and Wilbur felt the same. Want to read at night but without wax dripping onto your bedside table? Thomas Edison (probably) discovered the carbon filament for just that reason. Vegan but love meringues? Goose Wohlt has something for you, and it's called aquafaba. 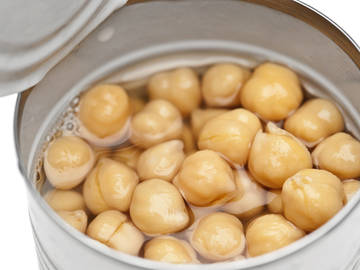 You don't even need to add an extra line to your grocery list.

Just what is aquafaba? It's the liquid that results when beans are cooked in water. (Chickpeas are the most common choice but others work too.) Most of us encounter it in the can. It's the thick, clear liquid that is typically rinsed off and sent down the drain. But the fate of that liquid is changing because Wohlt, an American software engineer and vegan, discovered in 2015 that the stuff can be used as an egg white replacer. It should be noted that, as is the case with most important inventions and discoveries, Wohlt's discovery was built on the discoveries of others, as the Aquafaba website explains. In what would be a spoiler were it not so wholly unsurprising, some French people (and in particular one Joël Roessel) were involved.

In addition to being the one who discovered that chickpea liquid could, by itself, be used as an egg white replacer, Wohlt also coined the word used to refer to this liquid—which is where your dictionary comes in. As aquafaba catches on among both professional and home cooks, as well as bartenders, the word is becoming increasingly common. Wohlt's choice, aquafaba, is an apt name and well-formed: aqua is Latin for "water," and faba is Latin for "bean." Inventions aren't always named so well. The word television mashes together elements from two different languages, a fact that C. P. Scott, editor of the Manchester Guardian considered damning of the medium itself: “Television? The word is half Greek and half Latin. No good will come of it.”

Pedigrees aside, what concerns lexicographers is how much a new word gets used. Aquafaba is doing quite well, especially for so young a term, and not just among vegans. While the 73,000+ members of the original Facebook group devoted to cooking with aquafaba are looking for strictly vegan ways to use the stuff, a newer group with more than 10,000 members welcomes discussion about non-vegan uses as well. The word is also making appearances on grocery store shelves as an ingredient and in menus. All of which means that it may find its way to your dictionary soon too.