A lot is used to describe something of great quantity of frequency. A common error is to combine the indefinite article a with lot to form alot, but this is best avoided. A lot is also sometimes confused with allot, which means "to assign as a share or portion." Keep this in mind the next time you "allot a lot of lots." 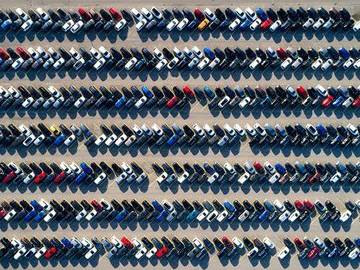 There's a lot happening in that lot.

Use 'A Lot' Rather Than 'Alot'

A lot is a common phrase formed by combining the indefinite article a with the noun lot (“a considerable quantity or extent”).

Specifically, it can be used adverbially to mean "by a great degree" or "frequently" (“Her current apartment is a lot nicer than her last one”; “he goes swimming a lot during the summer”) or as a noun phrase meaning "a great amount" (“We had a lot of fun at the party”; “There were a lot of people at the beach”).

Sometimes you will see the article run together with lot to form alot, but most usage experts would consider this an error. The a is an indefinite article that functions just as it does in “I bought a dozen roses,” and should not be considered part of the noun itself.

In fact, lot can be modified with a word (such as whole) that separates it from the article, as in “They got into a whole lot of trouble.”

Lot is also found in a plural form not introduced by any article, as in “a painting with lots of color” or “Lots of people eat at that restaurant.” Such use tends to be found in less formal writing.

Adding to the confusion is that there is also a verb allot, meaning “to assign as a share or portion, or to distribute by lot or as if by lot.”

Finally, there is a classic trivia quiz, with chances to spin the prize wheel for a random number of points per question. Pap says there are more games, but not all can fit into the time allotted.
— Kalyn Over, The Charleston Post and Courier, 17 Jan. 2020

They ended up in Uganda, in the enormous Nakivale refugee settlement. They slept on the ground. Each person was allotted one bottle of oil, 1 pound of corn, 1 pound of beans per month. Those allotments weren’t enough to survive on.
— Lisa Gray, The Houston Chronicle, 11 Jan. 2020

One way to keep these words straight might be to remember that the verb is close in meaning to allocate, which also has two L’s, while the noun phrase consisting of the greater number of words (that is, two) applies to the large amount of something.