The many titles of the British peerage are used in the traditions, hierarchies, and ceremonies of government and society, not to mention costume dramas. Good manners dictate that correct titles be used—but they can sometimes be confusing. Here’s a quick guide. 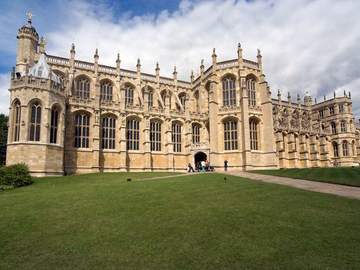 If you haven't already, take this moment to put on your big, fancy hat.

The royal titles are straightforward: England’s reigning monarch, the eldest child of the preceding monarch, is Queen Elizabeth (her father was King George VI). Her immediate family can all be called princes or princesses. Prince comes from the Latin word that literally means “one who takes the first part,” therefore is the “first person” or “leader”; it shares its ultimate Latin root with words that denote firstness in one way or another, like principal and prime and primary.

By tradition, only those born into the royal family can use “prince” or “princess” before their name and, other than the Prince of Wales—presumably to show his primacy—they are officially known by other titles: Prince William is the Duke of Cambridge, for example. Even though many people refer to “Princess Diana” or “Princess Kate,” the title of princess should properly come after their names, since they were not born into the royal family; they are officially referred to as “Diana, Princess of Wales” and, for Kate, “Princess William of Wales” (it’s impossible to deny the inherent sexism in a system designed around primogeniture, after all).

The official title of Prince Phillip, the Queen’s late husband, was the Duke of Edinburgh. He was also known as the prince consort, meaning the husband of a reigning queen or queen regnant. Kate Middleton would become queen consort when William becomes king. These peculiar titles with adjectives that follow the nouns are reminders of the somewhat surprising fact that most of the words that we associate with this most British of institutions derive from French, since they were adopted following the Norman Conquest of Britain in 1066. Even the motto on the British royal coat of arms is in French: Dieu et mon droit (“God and my right”), as is the motto of the famous knightly Order of the Garter: Honi soit qui mal y pense.

After royalty comes nobility, and these titles also derive from their French antecedents. The five noble ranks, in descending order, are:

William the Conqueror himself was the Duke of Normandy, and he brought the title over the Channel.

A marquess is “a member of the British peerage ranking below a duke and above an earl.” It’s less well-known as a title than duke or earl, probably because there are fewer marquessates than dukedoms or earldoms in Britain. Marquess is an anglicization of the French marquis, pronounced \mahr-kee\ with a silent s, but marquess is pronounced in the English manner as \MAHR-kwus\. The feminine form of the title in French, marquise, is pronounced \mahr-keez\, but the feminine form in English is marchioness, pronounced \MAHR-shuh-nus\. Marchioness is derived from Latin rather than French, probably because the French-derived title marquisess sounded too much like marquess.

Of these titles, only earl is an etymologically English word. Earl is an ancient title that comes from the Old English word for "warrior" or "nobleman." An earl is the English equivalent in rank to a European count; for some reason, there is no feminine form of earl, so the British aristocracy uses the more continental sounding countess.

Viscount is pronounced \VYE-count\, and is, etymologically speaking, a "vice-count" or inferior count.

Below the noble ranks, there are titles of honor that include:

A duke or duchess is addressed as “your grace,” as is an archbishop, except for those royal dukes (members of the Queen’s family), who are referred to as “royal highness.” The distinction of being referred to simply as “your highness” might logically be assumed to be the reigning monarch, but in Britain the Queen is only addressed as “your majesty.”

Sir is used to address a man who has the rank of baronet or knight; the higher nobles are referred to as Lord. Lady is used when referring to women who hold certain titles: marchioness, countess, viscountess, or baroness. It can also be used of the wife of a lower-ranking noble, such as a baron, baronet, or knight.

Lady is also the courtesy title for the daughters of the higher-ranking nobles duke, marquess, or earl. The daughters of viscounts and barons are referred to as "The Honorable" (that is, ahem, “The Honourable”), and daughters of baronets or knights are simply called "Miss."

Now it’s time to pour yourself a cuppa and watch the festivities unfold on TV. After all, if you’re reading this, then, like us, you weren’t invited.

MORE FROM ACROSS THE POND: The Great British Vocabulary Quiz