Languages depend upon patterns, both for forming words and for connecting them in ways that can be understood. We tend to notice unusual words like thrice, which is less frequently heard than twice, and “made-up” terms that we understand because they follow patterns a bit too far, like throuple (based on couple) or eleventy-first. Other words are transparently modeled on existing ones, like workaholic. Following patterns is one of the ways that words are created, and in some cases we are more likely to recognize the pattern than the word itself:

Even if we’ve never encountered any of these verbs, the familiar forms make them easy to figure out. Such words were formed by a process known as back-formation, by which a part of a longer word is removed to form a shorter word. Words created by back-formation often follow tried-and-true patterns, and many are unremarkable and transparent in meaning, even if they are rarely used (such as rabble rouse or flappable. Others stand on their own and become frequently used words (unlike the oddballs cited above), like escalate or enthuse. Or complicit. 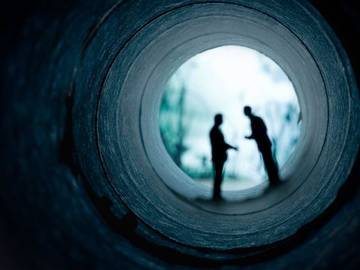 Both 'complicit' and 'complicate' share a root in the Latin 'complicare.'

Complicit is a relatively recent addition to English vocabulary, arriving in the mid-1800s. It is a back-formation from complicity, which came straight from the French word complicité in the 1600s. The oldest English word in this family is the now-obsolete complice (pronounced \KAHM-plus\)—defined as “an associate or accomplice especially in crime”—which dates back to the 1400s, when it came from French (the modern word in French for “accomplice” is still complice, pronounced \kohn-pleess\). These words ultimately derive from the Latin verb meaning “to fold together,” complicare, formed by combining com- (meaning “with,” “together,” or “jointly”) and the verb plicare, meaning “to fold.” Complicit literally means “folded together.”

Of course, “folded together” may be the literal meaning of this Latin root, but it has become the figurative meaning in the English word complicit: its definition “helping to commit a crime or do wrong in some way” is a description of individuals thick as thieves, with their motives and actions “folded together” metaphorically. Complicity and its cousins accomplice, complicitous, and complice are all part of this gang.

Complicare is also the root word of another English word, one that expresses its etymological meaning more literally than figuratively: complicate. In this case, the idea of things “folded together” makes sense as an image of twists and turns of fabric. The -pli- of these words is from plicare (“to fold”), and is also the root of ply, the verb meaning “to twist together” or the noun meaning “one of several layers.”

Other words that derive from plicare are also illuminated by their etymologies: explicit is “unfolded” and implicit is “folded in.” When different building blocks of words like com-, ex-, and im- combine their respective meanings with a single root, each resulting word expresses a slightly different facet of the literal and figurative potential of language. Whether we're adding or removing parts of words, when meanings are folded together, things can get, you know, complicated.