GAMES BROWSE THESAURUS WORD OF THE DAY WORDS AT PLAY SETTINGS
Word of the Day : March 24, 2020

1 : of a timid disposition : fearful

Timid and timorous don't just have similar spellings and meanings; they are etymologically related as well. Both words ultimately derive from the Latin verb timēre, meaning "to fear." The immediate ancestor of timid is Latin timidus (with the same meaning as timid), whereas timorous traveled to Middle English by way of the Latin noun timor ("fear") and the Medieval Latin adjective timorosus. Timid may be the more common of the two words, but timorous is older. It first appeared in English in the mid-15th century; timid came on the scene a century later. Both words can mean "easily frightened" (as in "a timid mouse" or "a timorous child") as well as "indicating or characterized by fear" (as in "he gave a timid smile" or "she took a timorous step forward").

The study suggests that timorous people suffer from stress more frequently than their bolder peers.

"Perhaps most disappointing was the 1935 'Mosaic Quartet'…, a collection of five short movements that the performers can play and repeat in whatever order they choose. It's the kind of innovation that sounds intriguing in theory, but … they felt mild and even timorous in comparison with Cage's much wilder spirit." — Joshua Kosman, The San Francisco Chronicle, 20 Jan. 2020 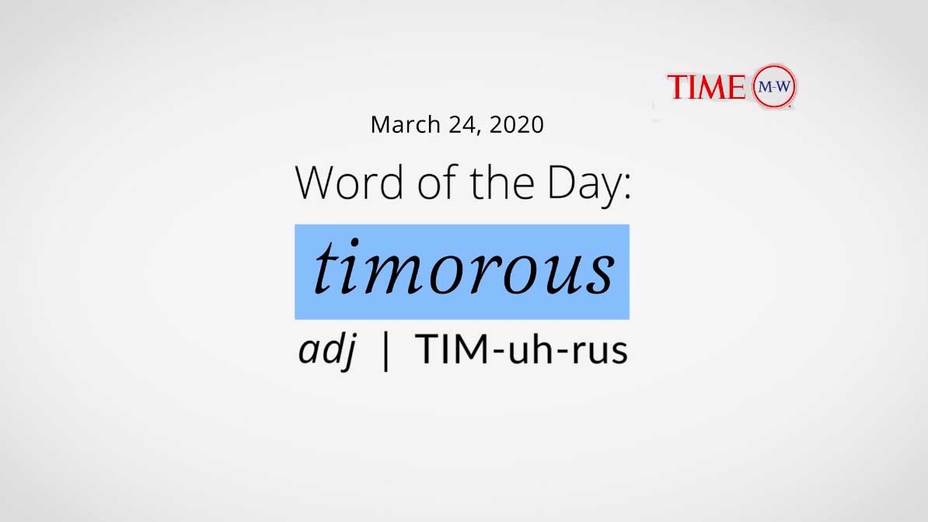