GAMES BROWSE THESAURUS WORD OF THE DAY WORDS AT PLAY SETTINGS
Word of the Day : December 10, 2019

: to state or do over again or repeatedly sometimes with wearying effect

Can you guess the meaning of iterate, a less common relative of reiterate? It must mean simply "to state or do," right? Nope. Actually, iterate also means "to state or do again." It's no surprise, then, that some usage commentators have insisted that reiterate must always mean "to say or do again AND AGAIN." No such nice distinction exists in actual usage, however. Both reiterate and iterate can convey the idea of a single repetition or of many repetitions. Reiterate is the older of the two words—it first appeared in the 15th century, whereas iterate turned up in the 16th century. Both stem from the Latin verb iterare, which is itself from iterum ("again"), but reiterate took an extra step, through Latin reiterare ("to repeat").

"Flanery reiterated that the new hotel, HRM facility and expanded seating will not require Churchill Downs to expand outside of its current property. Churchill Downs will continue to have a 'constant dialogue' with neighbors, Flanery said." — Sarah Ladd, The Courier-Journal (Louisville, Kentucky), 31 Oct. 2019

"In addition to addressing the situation with Green, Durant reiterated that he won't be playing this season. He tore his Achilles tendon during Game 5 of the NBA Finals." — Connor Letourneau, The San Francisco Chronicle, 31 Oct. 2019 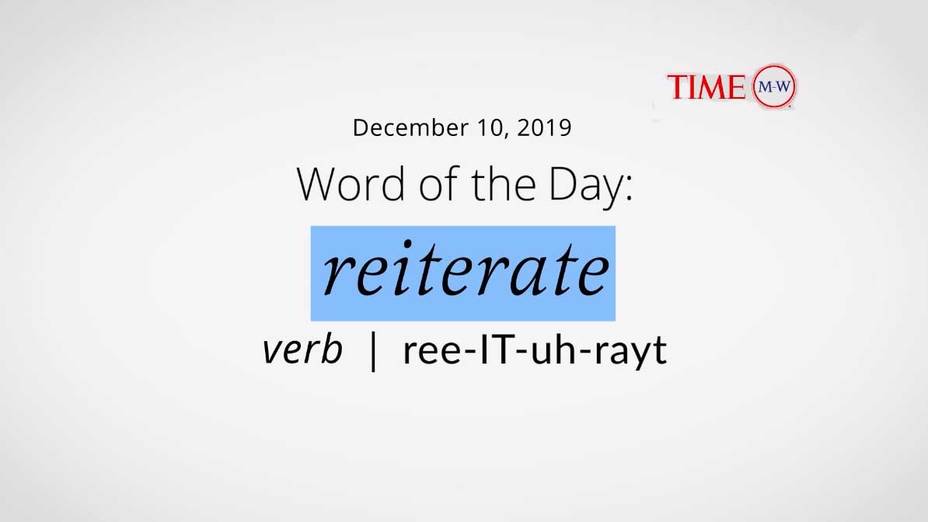 verb - to state or do over again or repeatedly