GAMES BROWSE THESAURUS WORD OF THE DAY WORDS AT PLAY SETTINGS
Word of the Day : November 19, 2019

1 : difficult or impossible for one of ordinary understanding or knowledge to comprehend : deep

2 : of, relating to, or dealing with something little known or obscure

While the adjective recondite may be used to describe something difficult to understand, there is nothing recondite about the word's history. It dates to the early 1600s, when it was coined from the synonymous Latin word reconditus. Recondite is one of those underused but useful words that's always a boon to one's vocabulary, but take off the re- and you get something very obscure: condite is an obsolete verb meaning both "to pickle or preserve" and "to embalm." If we add the prefix in- to condite we get incondite, which means "badly put together," as in "incondite prose." All three words have Latin condere at their root; that verb is translated variously as "to put or bring together," "to put up, store," and "to conceal."

"Ocampo (1903-1993) is a legend of Argentinian literature, and this collection of her short stories brings some of her most recondite and mysterious works to the English-speaking world." — Publisher's Weekly Review, 25 June 2019

"Deforestation, desertification, and sea-level rise are topographic, horizontal crises of land-clearing, creeping dunes, and saltwater surges. The realm of rocks, by contrast, seems too motionless and too recondite to be shaped by unnatural shifts above." — Rebecca Giggs, The Atlantic, July 2019 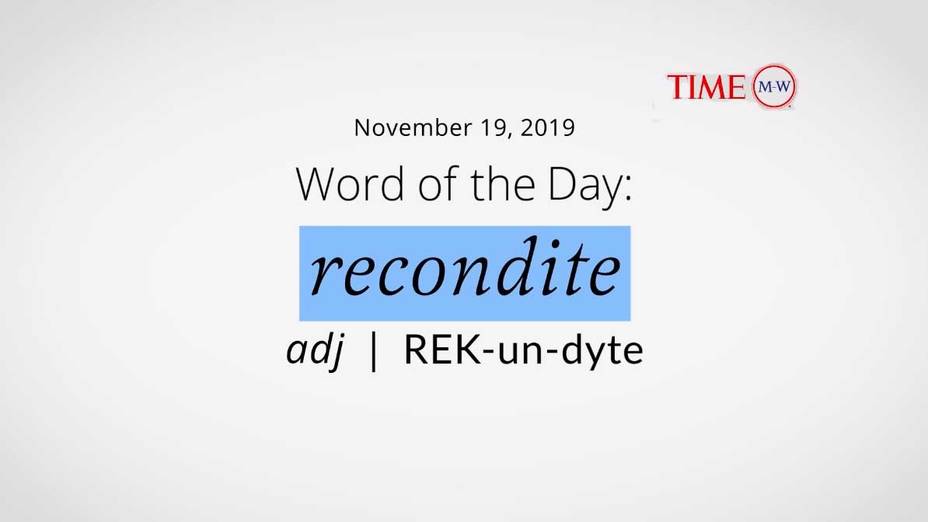 adj. - concealed or difficult to comprehend