GAMES BROWSE THESAURUS WORD OF THE DAY WORDS AT PLAY SETTINGS
Word of the Day : December 30, 2019

2 : of or relating to the next to the last syllable of a word

Penultimate isn't the last word in words for things that are next to last. There is a pair of noun synonyms that are used commonly enough to have gained entry into abridged dictionaries: penult and penultima. Although all three can refer to something that's next to last, penult and penultima are usually a bit more specific; they are used most often to identify the next to last syllable of a word. All three derive from paenultima, the feminine of paenultimus, a Latin root from paene ("almost") and ultimus ("last"). You may occasionally hear the word penultimate used as an intensified version of ultimate, as in "a race they've called 'the penultimate challenge.'" This use isn't typically found in edited prose, however, or in dictionaries. One of our editors discusses it in this video.

The penultimate episode of the TV series features some shocking plot twists that set up what will surely be a thrilling series finale.

"There aren't too many players in [Major League Baseball] history who come to the plate in a game with their statue overlooking them from the outfield concourse. But such was the case in Paul Konerko's final two MLB games. The White Sox unveiled his statue on the left field concourse on September 27, 2014 prior to his penultimate game." — Chris Kamka, NBC Sports Chicago, 18 Nov. 2019

Fill in the blanks to complete the name for the third syllable of a word counting from the end (such as cu in accumulate): an _ _ _ en _ l _. 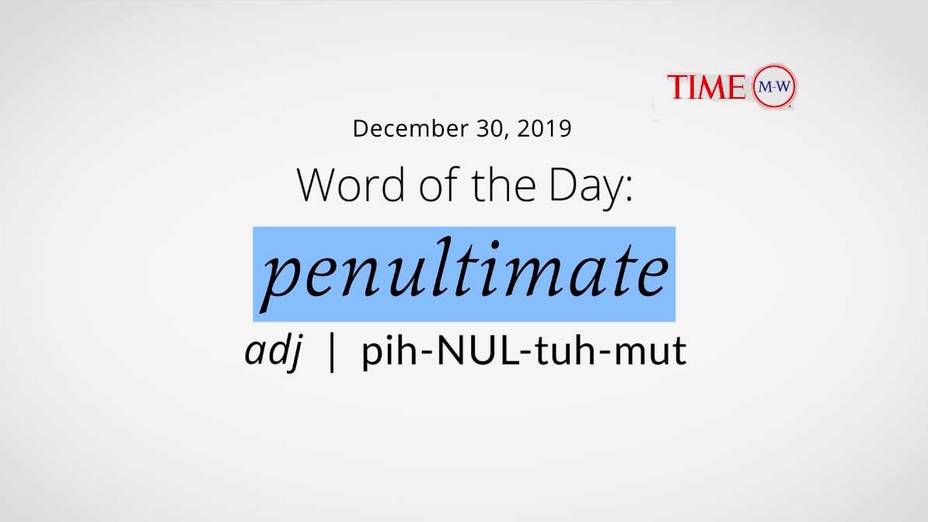