GAMES BROWSE THESAURUS WORD OF THE DAY WORDS AT PLAY SETTINGS
Word of the Day : January 31, 2020

1 : having death as a subject : comprising or including a personalized representation of death

2 : dwelling on the gruesome

3 : tending to produce horror in a beholder

We trace the origins of macabre to the name of the Book of Maccabees, which is included in the Roman Catholic and Eastern Orthodox canons of the Old Testament and in the Protestant Apocrypha. Sections of this biblical text address both the deaths of faithful people asked to renounce their religion and the manner in which the dead should be properly commemorated. In medieval France, representations of these passages were performed as what became known as the "dance of death" or "dance Maccabee," which was spelled in several different ways, including danse macabre. In English, macabre was originally used in reference to this "dance of death" and then gradually came to refer to anything grim or gruesome.

"The secret of Killing Eve is that its macabre sense of humor and spy-story subversions are ornamental compared with the series' grist: the strange, transformative pull the two main characters have on each other." — Sophie Gilbert, The Atlantic, 5 Apr. 2019

"Described as a surgeon by the newspapers, Holmes was charged with having broken into a vault in Hendon churchyard on 13 September 1828 … and cut the heads off three bodies. This strange and macabre story is quite unique, yet the reasons Holmes gave for his actions still applied directly to the advancement and development of medical understanding." — Suzie Lennox, Bodysnatchers, 2016 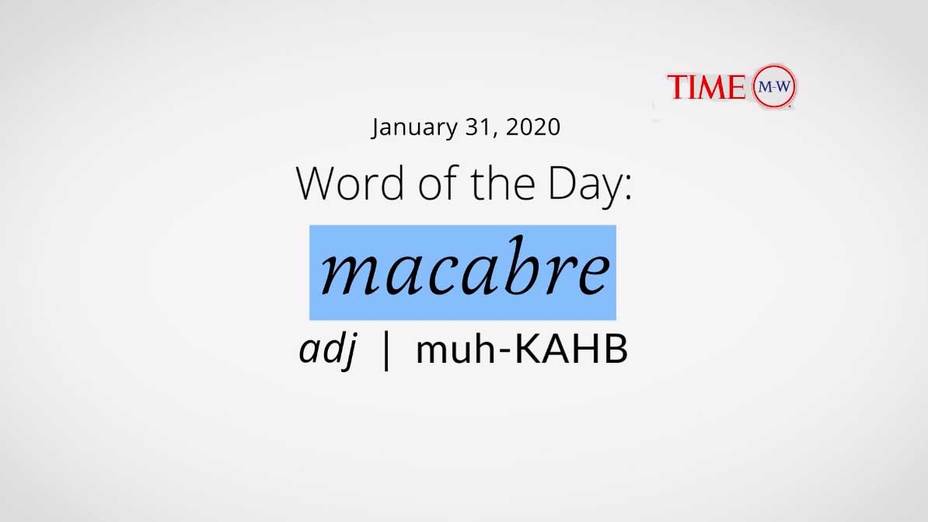 adj. - focused on death or the gruesome