GAMES BROWSE THESAURUS WORD OF THE DAY WORDS AT PLAY SETTINGS
Word of the Day : December 6, 2019

Etymologists take a gingerly approach to assigning any particular origins to this word. While it might have come from the name of the spice, there's nothing concrete to back up that idea. Another conjecture is that it's related to an Old French word, gensor, which meant "delicate." That's because in 16th century English an earlier sense of gingerly often referred to dancing or walking with dainty steps. Not till the 17th century did it change to apply to movements that were cautious in order to avoid being noisy or causing injury, and to a wary manner in handling or presenting ideas. Not too surprisingly, given its -ly ending, gingerly is also quite often correctly used as an adverb, as in "they moved gingerly on the icy pond."

"The reality: I am averse to wet clothes, squishy shoes and algae in my hair, so I cautiously stepped into a kayak, trying my darndest not to rock the boat, and set out at a gingerly pace on a still lake." — Liz Carey, The Virginian-Pilot (Norfolk, Virginia), 15 May 2012

"The 2019 Emmy Awards … were home to more than a few memorable moments. One we can't get out of our heads was owned by Gwyneth Paltrow, whose sleek-yet-restrictive silver dress made for a gingerly walk across the stage that caught the internet's attention." — Andy Moser, Mashable, 23 Sept. 2019

Fill in the blanks to complete an antonym of gingerly: he _ _ le _ s. 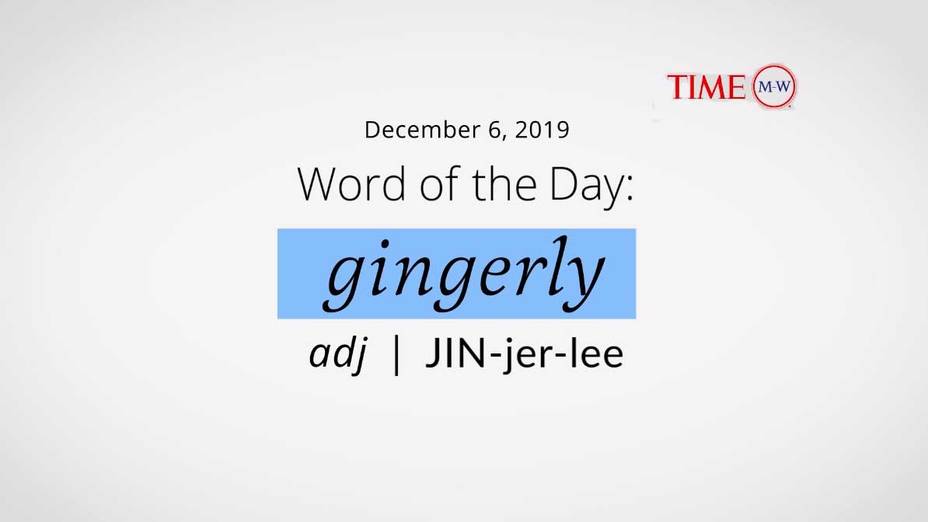