GAMES BROWSE THESAURUS WORD OF THE DAY WORDS AT PLAY SETTINGS
Word of the Day : December 5, 2019

: to accept, comply, or submit tacitly or passively —often used with in or to

Acquiesce means essentially "to comply quietly," so it should not surprise you to learn that it is ultimately derived from the Latin verb quiēscere, meaning "to be quiet." It arrived in English in the early 1600s, via the French acquiescer, with the senses "to agree or comply" and "to rest satisfied" (this latter sense is now obsolete). An early example of the word acquiesce in the sense of "to agree or comply" can be found in the writings of the English philosopher Thomas Hobbes who, in his 1651 masterpiece, Leviathan, argued that people must subject themselves completely to a sovereign and should obey the teachings of the church. Encouraging his readers to adopt his position he wrote, "Our Beleefe … is in the Church; whose word we take, and acquiesce therein."

Eventually, the professor acquiesced to the students' request to have the seminar's final class be a potluck.

"Moving him back to second grade didn't seem like a realistic option. The third-grade teacher reassured us that he seemed ready both academically and socially. We acquiesced, and he became an official third-grader a few weeks later." — Lisa L. Lewis, The Washington Post, 8 Oct. 2019 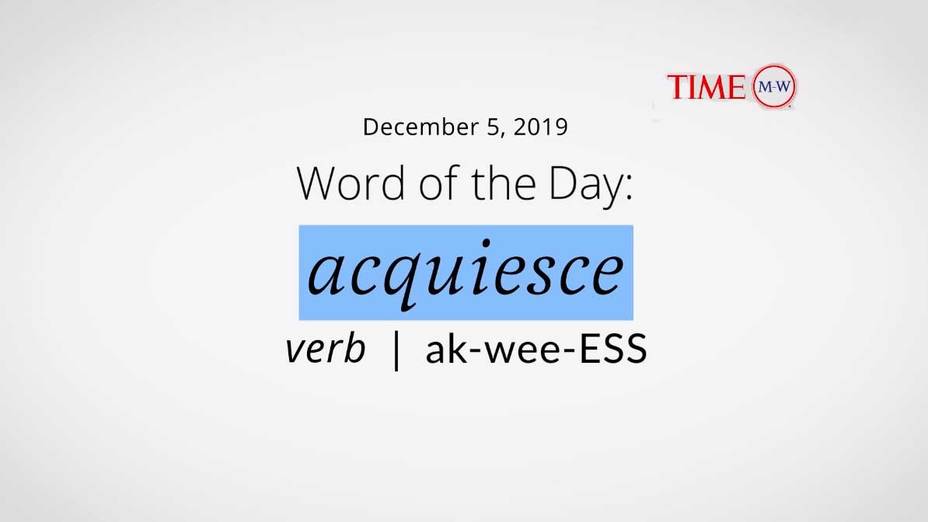 verb - to accept, comply, or submit