GAMES BROWSE THESAURUS WORD OF THE DAY WORDS AT PLAY SETTINGS
Word of the Day : February 10, 2020

In Anglo-French, someone who was genteel and well-brought-up was described as deboneire—literally "of good family or nature" (from the three-word phrase de bon aire). When the word was borrowed into English in the 13th century, it basically meant "courteous," a narrow sense now pretty much obsolete. Today's debonair incorporates charm, polish, and worldliness, often combined with a carefree attitude (think James Bond). And yes, we tend to use this sense mostly, though not exclusively, of men. The "carefree" characteristic of a debonair person influenced the modern "lighthearted, nonchalant" sense of the word, as illustrated by film critic Owen Gleiberman: "It wouldn't be wrong to call Ocean's Eleven a trifle, but it's a debonair trifle made with high-wire effrontery, the kind that can't be faked. This giddy and glancing charade is one of the most sheerly pleasurable movies to come out this year…."

"Bacs, 47, has sharp features, including a pointed nose; he carries permanent stubble and slicks back his silvered hair, in the style of a debonair, world-conquering James Bond villain." — Cam Wolf, GQ, May 13, 2019 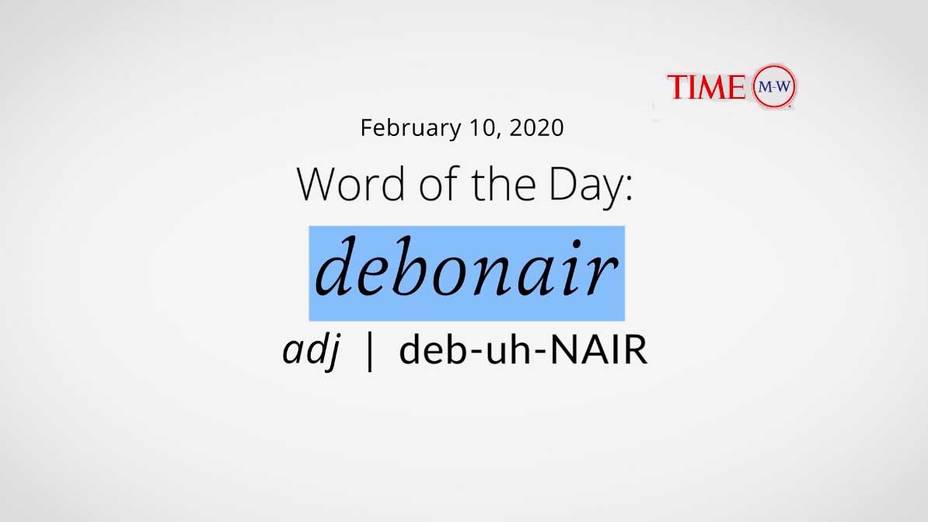