GAMES BROWSE THESAURUS WORD OF THE DAY WORDS AT PLAY SETTINGS
Word of the Day : March 11, 2020

1 : of, relating to, or characteristic of the ancient city of Byzantium

2 architecture : of, relating to, or having the characteristics of a style of architecture developed in the Byzantine Empire especially in the fifth and sixth centuries featuring the dome carried on pendentives over a square and incrustation with marble veneering and with colored mosaics on grounds of gold

3 Christianity : of or relating to the churches using a traditional Greek rite and subject to Eastern canon law

4 often not capitalized a : of, relating to, or characterized by a devious and usually surreptitious manner of operation

Today, the city that lies on the Bosporus Strait in Turkey is named Istanbul, but it was once known as Constantinople (a name given to it when it became the capital of the Eastern Roman, or Byzantine, Empire), and in ancient times, it was called Byzantium. Its history is exotic—filled with mystics, wars, and political infighting—and over time the word Byzantine (from Late Latin Byzantinus, the name for a native of Byzantium) became synonymous with anything characteristic of the city or empire, from architecture to intrigue. The figurative sense referring to a devious manner of operation first appeared in the late 1930s. It was popularized by frequent use in reference to the Soviet Union, whose secrecy and despotism were equated by Westerners with what went on in the old Byzantine Empire.

"Unlike most Greek Orthodox churches in the U.S., though, St. Anna won't have a traditional Byzantine dome. While that might seem unusual, Savas said, it's hardly unheard of—there are churches in Greece that were built without that architectural feature." — Kathy Stephenson, The Salt Lake Tribune, 1 Feb. 2020

Fill in the blanks to complete the name for a gold coin introduced by Constantine and used until the fall of the Byzantine Empire: s _ l _ d _ s. 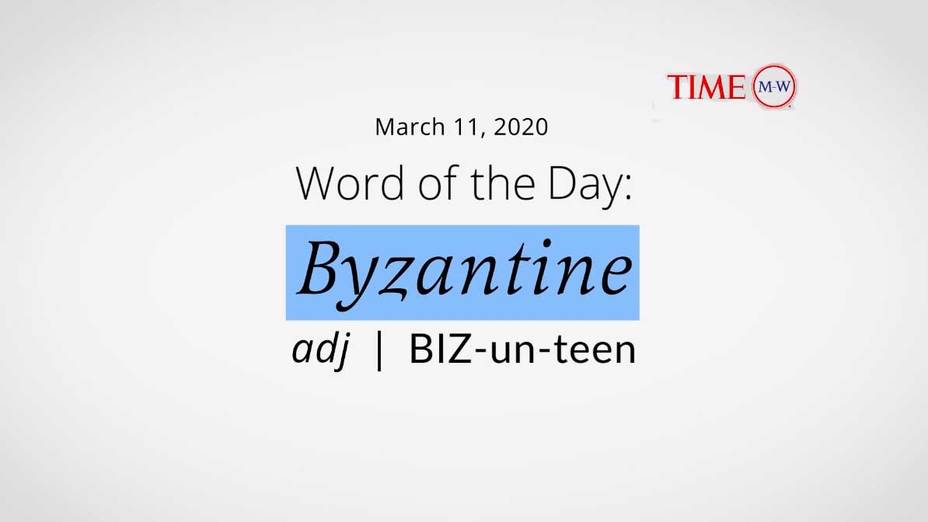