GAMES BROWSE THESAURUS WORD OF THE DAY WORDS AT PLAY SETTINGS
Word of the Day : June 7, 2019

The original meaning of bombast in English was "cotton or other material used as padding or stuffing." It is derived through Anglo-French bombés or bombace, from a Medieval Latin word (of various forms, including bambax and bombax) meaning "cotton plant, cotton fiber or wadding." Bombax was once thought to be a corruption of bombyx, a Latin (and ultimately Greek) word that means "silkworm" or "silk," although etymologists weren't certain why the shift from silk to cotton occurred. It turns out, however, that bombast's origins are more direct and unassuming: the Latin bombax is not a product of the silky bombyx but was borrowed from the Middle Greek bámbax, pámbax, which in turn probably traces back to the Middle Persian pambak ("cotton"). Bombast is no longer used in the sense of cotton padding or stuffing, but the word has been retained in modern English in a figurative sense referring to speech or writing that is stuffed or padded with pretense and unnecessary verbiage.

Laura complained that the editorial columns in her local newspaper were full of bombast and offered little in the way of intelligent opinion.

"Now that a new top-grossing movie of all time is about to be crowned, it seems the bombast of summer tentpole season has begun." — Richard Lawson and K. Austin Collins, Vanity Fair, 6 May 2019

Fill in the blanks to complete a word for the making of political speeches or the exaggerated bombast characteristic of such speeches: p _ _ _ f _ _ m _ sm. 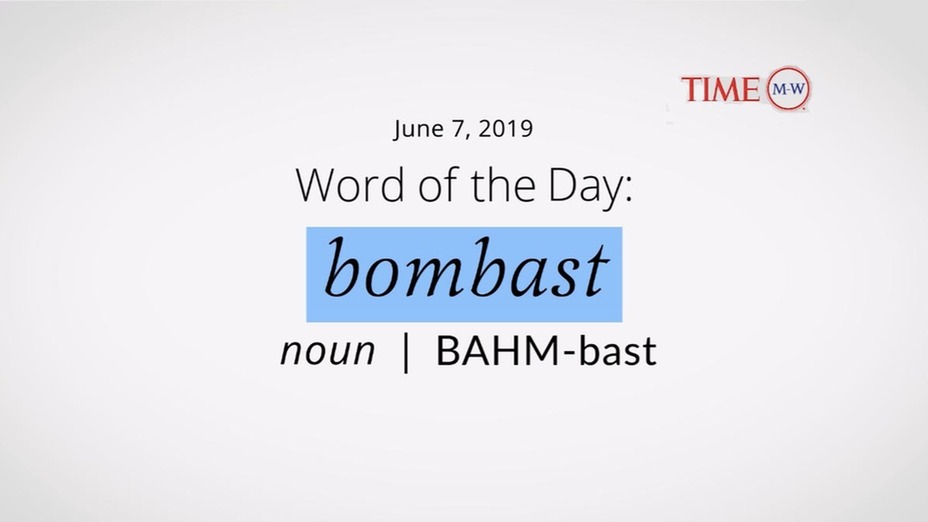