GAMES BROWSE THESAURUS WORD OF THE DAY WORDS AT PLAY SETTINGS
Word of the Day : March 13, 2020

1 a : using both hands with equal ease or dexterity

b soccer : using both feet with equal ease : two-footed

2 : designed or suitable for use by the left or right hand

Latin dexter originally meant "related to or situated on the right side," but since most people do things better with the right hand, dexter developed the sense of "skillful" (as demonstrated by our word dexterous). In 1646, English physician and author Sir Thomas Browne combined dexter with the Latin prefix ambi- (meaning "both") to form ambidextrous: "Some are ... ambidextrous or right-handed on both sides," he wrote. The word can also describe the kind of mental agility demonstrated by one with multiple diverse talents, such as the ambidextrous leader who successfully works with a diverse team to meet goals.

"Holiday is ambidextrous. He is the rare basketball player who shoots jump shots with one hand (right) but prefers to finish inside with the other (left)." — Christian Clark, NOLA.com (New Orleans, Louisiana), 2 Dec. 2019

"Miyamoto … also tells her he's ambidextrous and can use chopsticks with either hand, so if they go out for sushi, she can sit on either side." — Ben Flanagan, AL.com (Alabama), 5 Feb. 2020

Fill in the blanks to complete an adjective meaning "lacking in balance, symmetry, or proportion": l _ _ s _ de _. 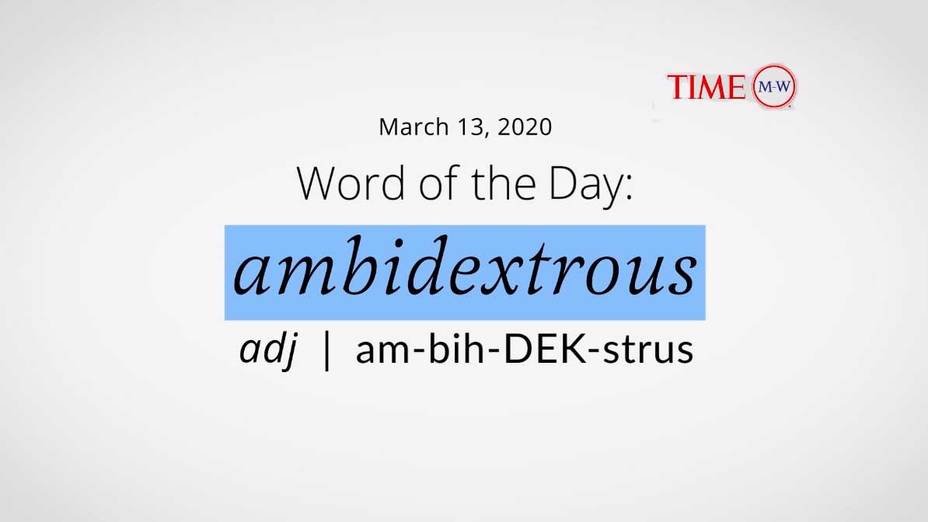