How does the noun gourmet contrast with its synonyms?

Some common synonyms of gourmet are epicure, gastronome, and gourmand. While all these words mean "one who takes pleasure in eating and drinking," gourmet implies being a connoisseur in food and drink and the discriminating enjoyment of them.

When would epicure be a good substitute for gourmet?

Although the words epicure and gourmet have much in common, epicure implies fastidiousness and voluptuousness of taste.

When is it sensible to use gastronome instead of gourmet?

The words gastronome and gourmet can be used in similar contexts, but gastronome implies that one has studied extensively the history and rituals of haute cuisine.

When is gourmand a more appropriate choice than gourmet?

In some situations, the words gourmand and gourmet are roughly equivalent. However, gourmand implies a hearty appetite for good food and drink, not without discernment, but with less than a gourmet's. 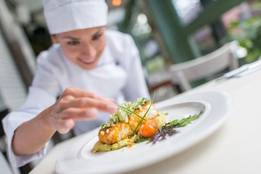 More from Merriam-Webster on gourmet