How is the word compare distinct from other similar verbs?

The words collate and contrast are common synonyms of compare. While all three words mean "to set side by side in order to show differences and likenesses," compare implies an aim of showing relative values or excellences by bringing out characteristic qualities whether similar or divergent.

compared the convention facilities of the two cities

In what contexts can collate take the place of compare?

The meanings of collate and compare largely overlap; however, collate implies minute and critical inspection in order to note points of agreement or divergence.

data from districts around the country will be collated

When might contrast be a better fit than compare?

While the synonyms contrast and compare are close in meaning, contrast implies an emphasis on differences.

contrasted the computerized system with the old filing cards 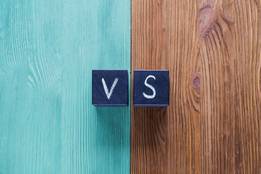 More from Merriam-Webster on compare