1
a
: an injury (such as a wound) to living tissue caused by an extrinsic agent
b
: a disordered psychic or behavioral state resulting from severe mental or emotional stress or physical injury
c
: an emotional upset
the personal trauma of an executive who is not living up to his own expectations

Trauma is the Greek word for "wound". Although the Greeks used the term only for physical injuries, nowadays trauma is just as likely to refer to emotional wounds. We now know that a traumatic event can leave psychological symptoms long after any physical injuries have healed. The psychological reaction to emotional trauma now has an established name: post-traumatic stress disorder, or PTSD. It usually occurs after an extremely stressful event, such as wartime combat, a natural disaster, or sexual or physical abuse; its symptoms include depression, anxiety, flashbacks, and recurring nightmares.

She never fully recovered from the traumas she suffered during her childhood. She never fully recovered from the trauma of her experiences. an accident victim with severe head trauma repeated trauma to a knee The accident victim sustained multiple traumas.
Recent Examples on the Web Speaking with moderator Salamishah Tillet, the 51-year-old actor reflected on the opportunities and limitations of confronting trauma through legal venues.

J. Kim Murphy, Variety, 14 Nov. 2022 For now, other parts of the crypto world have not suffered major trauma.

The Courier-Journal, 7 Nov. 2022 Despite his silence, his father did carry lifelong trauma, Caycedo-Kimura said.

Zoe Sottile, CNN, 6 Nov. 2022 Although officials determined at the time that head trauma had caused Terry's death, the particularly violent and grisly circumstances of her murder had prevented them from identifying her.

Arthur Jones Ii, ABC News, 3 Nov. 2022 The foundation divided the final $580,025 among 17 nonprofits that serve people who were not physically injured but still suffered trauma.

These example sentences are selected automatically from various online news sources to reflect current usage of the word 'trauma.' Views expressed in the examples do not represent the opinion of Merriam-Webster or its editors. Send us feedback. 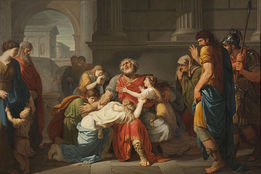 1
a
: a serious bodily injury (as that caused by an accident or violent act)
head trauma
b
: an abnormal psychological or behavioral state resulting from severe mental or emotional stress or injury
2
: a cause of trauma
traumatic
trə-ˈmat-ik

1
a
: an injury (as a wound) to living tissue caused by an extrinsic agent
surgical trauma
the intra-abdominal organs at greatest risk to athletic trauma are the spleen, pancreas, and kidney

M. R. Eichelberger
see blunt trauma
b
: a disordered psychic or behavioral state resulting from mental or emotional stress or physical injury
2
: an agent, force, or mechanism that causes trauma

More from Merriam-Webster on trauma