Psephology is from the Greek word psēphos, meaning "pebble." (One relative of psephology is psephomancy, meaning "divination by pebbles.") Psephology merited election as the name for the work of analysts of elections, or psephologists, because pebbles were used by the ancient Greeks in voting. Similarly, the word ballot was an excellent choice for a means of voting since it is derived from balla, the Italian word for "ball," and Italians placed balls in a container to cast votes.

Dhruv Khullar, The New Yorker, 11 Aug. 2021 In fact, people who have been in psephology for 50 years have never seen a party come from the mid-20s to the high 30s in a space of three weeks.

These example sentences are selected automatically from various online news sources to reflect current usage of the word 'psephology.' Views expressed in the examples do not represent the opinion of Merriam-Webster or its editors. Send us feedback.

Greek psēphos pebble, ballot, vote; from the use of pebbles by the ancient Greeks in voting 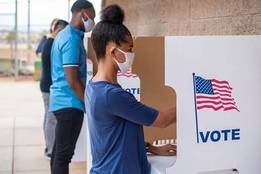 The History of 'Ballot'

Where your vote comes from