1
a
: the establishment of a claim of title to something under common law usually by use and enjoyment for a period fixed by statute
b
: the right or title acquired under common law by such possession
2
: the process of making claim to something by long use and enjoyment
3
: the action of laying down authoritative rules or directions
4
a
: a written direction for a therapeutic or corrective agent
specifically : one for the preparation and use of a medicine
b
: a prescribed medicine
c
: something (such as a recommendation) resembling a doctor's prescription
prescriptions for economic recovery
5
a
: ancient or long continued custom
b
: a claim founded upon ancient custom or long continued use
6
: something prescribed as a rule

The drug is only sold with a prescription. I have to pick up my prescription.
Recent Examples on the Web NeighborFavor contended that customers could confuse the two because both parties offer the delivery of pharmacy and prescription medicine products, according to a complaint filed last June. —

Rebecca Alter, Vulture, 18 Jan. 2023 Could semaglutide become Hollywood's most embraced prescription injection since Botox's approval for cosmetic use in 2002? —

Kelsi Zimmerman, Allure, 18 Jan. 2023 When a psychiatrist treating the 14-year-old Howard County youth did not receive records of his current medication, the physician relied upon available pill bottles to piece together his prescription history, according to the suit. —

These example sentences are selected automatically from various online news sources to reflect current usage of the word 'prescription.' Views expressed in the examples do not represent the opinion of Merriam-Webster or its editors. Send us feedback. 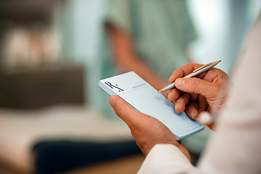 On 'Prescribe' and 'Proscribe'

Just what the doctor ordered (or forbade you from doing).

1
: the action of prescribing rules or directions
2
a
: a written direction or order for the preparation and use of a medicine
b
: a medicine that is prescribed
prescriptive
-ˈskrip-tiv
adjective

1
: acquisition of an interest (as an easement) in real property that is usually less than a fee by long-term, continuous, open, and hostile use and possession as determined by the law of a jurisdiction
gained title by prescription
see also easement by prescription at easement compare adverse possession at possession
2
in the civil law of Louisiana
a
: the running of a period of time set by law after which a right is unenforceable in Louisiana courts but may be enforced in another state forum
an interruption of prescription
by the prescription of ten years
also : the bar to an action that results from prescription see also peremptory exception compare peremption
b
: the creation of a right by the running of a period of time set by law
especially : acquisitive prescription in this entry
predial servitudes on property of the state may not be acquired by prescription —

Louisiana Civil Code
— acquisitive prescription \ ə-​ˈkwi-​zə-​tiv-​ \
: acquisition of ownership or other real rights in movables or immovables by continuous, uninterrupted, peaceable, public, and unequivocal possession for a period of time (as 10 years) set by law
also : such possession that creates real rights
acquisitive prescription is interrupted when the possessor acknowledges the right of the owner —

Note: The Louisiana Civil Code has set various periods of time for acquisitive prescription of movables and immovables. With the shorter periods (as 10 years for immovables or 3 years for movables) the Code also requires that the possessor possess in good faith and under just title. Acquisitive prescription does not run in favor of a person having precarious possession, because he or she possess the property on behalf of or with permission of the owner, until the possessor begins to possess the property on his or her own behalf (as after a lease terminates).

Note: Liberative prescription is similar to the common-law statute of limitations.

— prescription of nonuse
: the extinguishment or termination of a real right other than ownership as a result of the failure to exercise the right for a period of time (as 10 years) set by law
also : the period of time
3
: something prescribed as a rule
created a legal prescription against such acts

History and Etymology for prescription

More from Merriam-Webster on prescription