-ˌma-
1
: the naming of a thing or action by a vocal imitation of the sound associated with it (such as buzz, hiss)
also : a word formed by onomatopoeia
In comic books, when you see someone with a gun, you know it's only going off when you read the onomatopoeias. —

Christian Marclay
2
: the use of words whose sound suggests the sense
a study of the poet's onomatopoeia
onomatopoeic
ˌä-nə-ˌmä-tə-ˈpē-ik

English speakers have only used the word onomatopoeia since the 1500s, but people have been creating words inspired by the sounds heard around them for much longer. It may not surprise you to learn that fizz, jingle, toot, and pop are onomatopoeic in origin, but did you know the same is true of bounce, tinker, and blimp? Boom! Now you do. In fact, the presence of so many imitative words in language spawned the linguistic bowwow theory, which postulates that language originated in the imitating of natural sounds. While it’s highly unlikely that onomatopoeia is the sole impetus for human language, it certainly made a mark, which is nothing to sneeze at.

The term hiccup is an example of onomatopoeia … —

Fred Cicetti, Montague Reporter, 6 Mar. 2008 You might think it was an onomatopoeia of the sound a Frisbee makes as it moves through the air, but the name has been attributed for years to the Frisbie Pie Company of Bridgeport, Conn., which went out of business in 1958. —

Mark Danna, Sports Illustrated, 11 May 1987 Buzz and hiss are examples of onomatopoeia.
Recent Examples on the Web Thousands of fireflies, called kelip-kelip in Malaysia — their name is a sort of visual onomatopoeia for their twinkling — can settle on riverside trees. —

Joshua Sokol, Quanta Magazine, 20 Sep. 2022 His take may sound like an extreme read on a silly onomatopoeia. —

Spencer Kornhaber, The Atlantic, 28 July 2022 Hori horis originated in Japan and its name is the Japanese onomatopoeia for the sound of digging in the dirt. —

Leanne Potts, Better Homes & Gardens, 2 Dec. 2021 Reading his writing can be kind of like taking a psychedelic — a literary onomatopoeia. —

Washington Post, 23 July 2021 The son remembers riding somewhere with his father as a young boy, with Wills teaching him through a ditty how to spell the word onomatopoeia, which the son can still spell 60 years later thanks to that experience. —

cleveland, 20 Nov. 2019 Praised for his exceptional lyrical vocal style and for the complex rhythmic structure of his phrasing, Maelo incorporated greetings, religious chants, onomatopoeias, popular sayings, proverbs and aphorisms into his improvisations. —

Howard Reich, chicagotribune.com, 18 Sep. 2019 This is essentially the quantification of onomatopoeia, like in the Adam West Batman series. —

These example sentences are selected automatically from various online news sources to reflect current usage of the word 'onomatopoeia.' Views expressed in the examples do not represent the opinion of Merriam-Webster or its editors. Send us feedback. 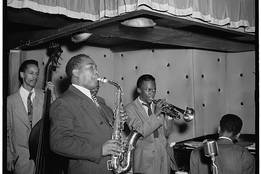 Charlie Parker and the Language of Jazz

The etymology of bebop

A Look at Uncommon Onomatopoeia

Some imitative words are more surprising than others

1
: the naming of a thing or action by imitation of natural sounds (as "buzz" or "hiss")
2
: the use of words whose sound suggests the sense (as for poetic effect)
onomatopoeic
-ˈpē-ik

More from Merriam-Webster on onomatopoeia