plural moderators
1
: one who presides over an assembly, meeting, or discussion: such as
a
: the chairman of a discussion group
b
: the nonpartisan presiding officer of a town meeting
c
: the presiding officer of a Presbyterian governing body
2
: one who arbitrates : mediator
3
: a substance (such as graphite) used for slowing neutrons in a nuclear reactor
moderatorship
ˈmä-də-ˌrā-tər-ˌship

The moderator allowed audience members to ask the governor questions. She acts as the moderator in our office meetings.
Recent Examples on the Web Just this week, the moderator of a large LinkedIn group reported a flood of fake accounts professing to be executives of real companies.

Steven Levy, WIRED, 7 Oct. 2022 The Scottish clergyman, the current moderator of the General Assembly of the Church of Scotland, had been invited to perform a sermon at Braemar and Crathie Parish Church, where the Queen worshipped during her time in Scotland.

Monique Jessen, Peoplemag, 9 Sep. 2022 The moderator of the presentation was Professor John Tasioulas, the inaugural Director for the Institute for Ethics and AI, and Professor of Ethics and Legal Philosophy, Faculty of Philosophy, University of Oxford.

Lance Eliot, Forbes, 21 June 2022 Archbishop of Canterbury Justin Welby and the moderator of the Church of Scotland, Rt.

Nicole Winfield, ajc, 10 June 2022 When the moderator of Tuesday's fireside chat with Newsom joked that he was relieved that the governor had not been abducted by aliens, Newsom mocked the Twitter accounts that had sprung up drawing attention to his absence from the public spotlight.

Maeve Reston, CNN, 9 Nov. 2021 When Jon Cohen, a writer for Science and the moderator of the debate, pressed him on transparency, Wang said the furin cleavage sites were not his part of the proposal.

Carolyn Kormann, The New Yorker, 12 Oct. 2021 The pro-Lee attendees were so disruptive at times that moderator Doug Wright of KSL Radio repeatedly asked the crowd to refrain from interrupting the debate.

Bryan Schott, The Salt Lake Tribune, 8 Nov. 2022 John Bruno, the only candidate running for the longer term, was a selectman for 15 years and the town moderator for nearly a decade.

These example sentences are selected automatically from various online news sources to reflect current usage of the word 'moderator.' Views expressed in the examples do not represent the opinion of Merriam-Webster or its editors. Send us feedback. 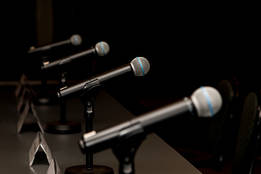 Trending: Debates: Everyone is Looking...

: a substance (as graphite, deuterium in heavy water, or beryllium) used for slowing down neutrons in a nuclear reactor

More from Merriam-Webster on moderator