: to supply with a microphone

—used as a code word for the letter m

Noun The announcer was wearing a mike.
Recent Examples on the Web
Noun
Tesla pioneered this drop-the-mike tech and Genesis has embraced it. —

Mike Sacks, The New Yorker, 7 Aug. 2022 Michaels, who will call his 11th Super Bowl Sunday when NBC broadcasts the game between the Cincinnati Bengals and the LA Rams, has been on the mike for some of the best moments in sports. —

Julie Mazziotta, PEOPLE.com, 25 Jan. 2022 The venue’s open-mike event, Grito de Boyle Heights, is hosted by Sammy Quetzalli on the second and fourth Wednesday of each month. —

Jireh Deng, Los Angeles Times, 8 Sep. 2021 In the back, Andy Conrad picked up a mike to challenge the emphasis on extending maximum life span, which is currently around a hundred and fifteen. —

Adam Iscoe, The New Yorker, 17 May 2021 Eztli, who has become a talent scout for poets across southeastern Los Angeles, likewise met Torres at an open mike night at Cruzita’s Deli in Huntington Park about four years ago. —

These example sentences are selected automatically from various online news sources to reflect current usage of the word 'mike.' Views expressed in the examples do not represent the opinion of Merriam-Webster or its editors. Send us feedback.

1939, in the meaning defined above 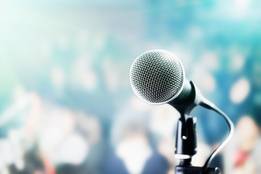 Trending: Trump: ESPN's Ratings Due to...

'Mike' is a shortened form of 'microphone.'