: any of various arboreal diurnal or nocturnal, chiefly arboreal primates (superfamily Lemuroidea) of Madagascar and the Comoros Islands that usually have a longish muzzle, large eyes, very soft woolly fur, and a long furry tail and that feed on fruit and plant parts (such as leaves, flowers, and seeds) and sometimes insects and small animals

Note: Unlike most other primates, lemurs have a well-developed sense of smell. Physical and genetic characteristics indicate that all lemurs descended from a common prosimian ancestor that arrived in Madagascar approximately 55 to 60 million years ago.

Though matriarchy is rare in primates, female dominance is the norm for most lemur species.

Patricia Edmonds
As a consequence of these activities and others, such as illicit hunting, most of the larger extant lemurs of Madagascar have very restricted ranges,

David A. Burney and Ross D. E. MacPhee
… chimpanzees and sifakas, a species of lemur from Madagascar, are more active and show less stereotypical behavior when shifted from indoor to outdoor enclosures.

Recent Examples on the Web For the first time, an aye-aye, an unusual-looking lemur species, was documented rooting around in its nose — and then licking its finger clean.

Ashley Strickland, CNN, 29 Oct. 2022 The researchers also noted that Alesi's 6.16-cubic-inch (101 cubic centimeters) brain was about as big as that of a modern lemur of the same size.

Charles Q. Choi, Scientific American, 10 Aug. 2017 Eighty-nine percent of its plant life, 95 percent of its reptiles and 92 percent of its mammals (including more than 100 lemur species) occur nowhere else in the world.

Dyan Machan, Smithsonian Magazine, 7 July 2022 But a martian would probably find a lemur much prettier than a human.

Abbey White, The Hollywood Reporter, 16 Aug. 2022 The technician finished his work and, before releasing the lemur, rewarded her with a katydid nearly the size of her head.

Elizabeth Preston, Smithsonian Magazine, 6 May 2022 The zookeepers said Bayraktar, a baby lemur, has grown slightly since the siege.

These example sentences are selected automatically from various online news sources to reflect current usage of the word 'lemur.' Views expressed in the examples do not represent the opinion of Merriam-Webster or its editors. Send us feedback.

1795, in the meaning defined above 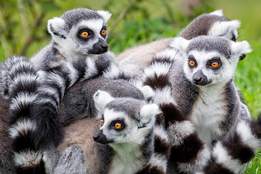 Can you tell a meerkat from a wombat?

: any of various tree-dwelling primates that are active at night, usually have large eyes, very soft woolly fur, and a long furry tail and were formerly widespread but are now found mainly in Madagascar

More from Merriam-Webster on lemur