1
: a device used to produce music
also : a singing voice
2
: implement
especially : one designed for precision work
3
a
: a measuring device for determining the present value of a quantity under observation
b
: an electrical or mechanical device used in navigating an airplane
especially : such a device used as the sole means of navigating
4
a
: a means whereby something is achieved, performed, or furthered
b
: one used by another as a means or aid : dupe, tool
5
: a formal legal document (such as a deed, bond, or agreement)

1
: to address a legal instrument to
2
: to score for musical performance : orchestrate
3
: to equip with instruments especially for measuring and recording data

Choose the Right Synonym for instrument

implement may apply to anything necessary to perform a task.

tool suggests an implement adapted to facilitate a definite kind or stage of work and suggests the need of skill more strongly than implement.

instrument suggests a device capable of delicate or precise work.

appliance refers to a tool or instrument utilizing a power source and suggests portability or temporary attachment.

utensil applies to a device used in domestic work or some routine unskilled activity.

Noun an instrument designed to measure the Earth's atmosphere The piano was his favorite musical instrument. Do you play any instruments?
Recent Examples on the Web
Noun
Eslava won $5,000, and an additional $5,000 was donated to the school for instrument purchases. —

Matthew J. Palm, Orlando Sentinel, 18 Jan. 2023 Unlike other activities that require intense brain work, like chess or puzzles, playing an instrument recruits almost every part of the brain, including multi-sensory responses. —

Micah Ling, Outside Online, 17 Jan. 2023 And some airports simply require visual contact with the runway at all times, with no instrument approach procedure available. —

Dan Edmunds, Car and Driver, 17 Jan. 2023 The chatbot isn’t meant to be a psychological support tool, but an instrument to carry out citizen science research. —

Beth Woodcontributor, San Diego Union-Tribune, 14 Jan. 2023 After the meeting, Johnson and her co-conspirators put in a last-minute proposal to develop an instrument for NASA. —

Sarah Scoles, Scientific American, 13 Jan. 2023 The satellite’s third instrument studied the makeup of the stratosphere, including levels of water vapor, nitrogen dioxide, aerosols and ozone, a gas that protects life on Earth by absorbing ultraviolet radiation from the sun. —

Will Sullivan, Smithsonian Magazine, 11 Jan. 2023
Verb
Unlike earthquake prediction — which in terms of short-term prediction is currently not feasible and may never be feasible on a short timescale — volcano prediction is feasible and is common if volcanoes are instrumented. —

NBC News, 23 May 2018 Bullerengue is a genre led mainly by elderly women, instrumented exclusively with artisan drums, and preserved through oral tradition. —

Bucky Mcmahon, Popular Mechanics, 8 Sep. 2017 The plan is for the NFL, when the technology is ready, to offer mouth guards instrumented with such sensors to players to measure their impact response. —

Barry Wilner, The Christian Science Monitor, 29 Aug. 2017 The plan is for the NFL, when the technology is ready, to offer mouth guards instrumented with such sensors to players to measure their impact response. —

These example sentences are selected automatically from various online news sources to reflect current usage of the word 'instrument.' Views expressed in the examples do not represent the opinion of Merriam-Webster or its editors. Send us feedback.

Middle English, from Anglo-French, from Latin instrumentum, from instruere to arrange, instruct 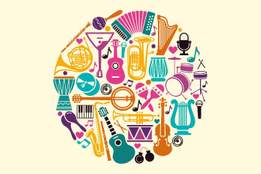 noun
in·​stru·​ment
ˈin(t)-strə-mənt
1
: a device used to produce music
2
: a means of getting something done
curiosity is an instrument of discovery
3
: a tool or implement designed especially for precision work
a surgical instrument
4
: an official legal document (as a deed, bond, or agreement)
5
a
: a measuring device for finding out the present value of a quantity under observation
b
: an electrical or mechanical device used in navigating an airplane
especially : such a device used as the only way of navigating

: any implement, tool, or utensil (as for surgery)

noun
in·​stru·​ment
1
: a means or implement by which something is achieved, performed, or furthered
an instrument of crime
2
: a document (as a deed, will, bond, note, certificate of deposit, insurance policy, warrant, or writ) evidencing rights or duties especially of one party to another under the law
a person is not liable on an instrument unless the person signed the instrument—

More from Merriam-Webster on instrument