fē-ˈän-ˌsā
: a man engaged to be married

Affidavit refers to a written promise, and its Latin roots connect it to another kind of promise in English. It comes from a past tense form of the Latin verb affidare, meaning “to pledge”; in Latin, affidavit translates to “he or she has made a pledge.”

Affidare is also the root of affiance, an archaic English noun meaning “trust, faith, confidence,” “marriage contract or promise,” or a meaning that has completely fallen from use, “close or intimate relationship.” More familiar to modern English speakers is the verb affiance, meaning “to promise in marriage” or “to betroth.” It usually appears as a fancy-sounding participial adjective:

I like to give affianced friends a copy of Rebecca Mead’s book “One Perfect Day,” which exposes the ridiculous wedding industry.
—Mollie Hemingway, The Federalist, 7 October 2014

Affiance came through French to English in the 14th century, and, nearly 500 years later, the related French words fiancé and fiancée were added to English. Etymologically speaking, a fiancé or fiancée is a “promised one.”

People may well be anxious, when referring to their betrothed, to make sure that they use the correct term. So the fact that fiancé and fiancée are pronounced exactly the same may cause some degree of worry and uncertainty. These two words are borrowed directly from French, in which language they have equivalent but gendered meanings: fiancé refers to a man who is engaged to be married, and fiancée refers to a woman. We have, as of this date, no evidence suggesting that the meaning of either word is affected by the gender of the person to whom the fiancé or fiancée is engaged.

Let me introduce my fiancé. couldn't wait to show off her fiancé to all of her relatives
Recent Examples on the Web Doro’s niece Jenna Bush and fiance Henry Hager also decided a formal White House wedding was not for them.

Michael R. Wickline, Arkansas Online, 11 Nov. 2022 My fiance doesn’t have any sisters and his mom always wanted a daughter.

Amy Dickinson, Washington Post, 9 Oct. 2022 In the meantime, between 300 and 400 residents will need to be relocated, per Aurora Fire Rescue, like Allyson Goodwin, who lived at the building with her fiance and their son.

Chicago Tribune, 26 July 2022 Reed's supporters believe that evidence gathered after the trial points to another suspect, Stites's fiance Jimmy Fennell, a disgraced police officer who later served a 10-year prison sentence for a kidnapping and rape committed while on duty.

These example sentences are selected automatically from various online news sources to reflect current usage of the word 'fiancé.' Views expressed in the examples do not represent the opinion of Merriam-Webster or its editors. Send us feedback.

French, from Middle French, from past participle of fiancer to promise, betroth, from Old French fiancier, from fiance promise, trust, from fier to trust, from Vulgar Latin *fidare, alteration of Latin fidere — more at bide

1838, in the meaning defined above 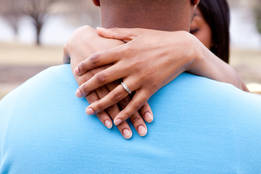 How the 'Ring Finger' Got Its Name

'Leech finger' doesn't have the same ring to it