meteorology
: a powerful, rapidly intensifying storm associated with a sudden and significant drop in atmospheric pressure Tens of thousands of utility workers were working over the weekend after the muscular storm—known as a "bomb cyclone" for its rapid pressure drop—battered neighborhoods from Virginia to Maine.— Rick Jervis As incoming air rises around the center of the storm, it gets carried off by the jet stream and that increases the speed of the incoming air. The faster the air moves, the faster the barometric pressure drops. In a really severe nor'easter, the pressure can drop 24 millibars in 24 hours. This is known as a "bomb cyclone."— Clay Thompson — compare bombogenesis

First Known Use of bomb cyclone

The first known use of bomb cyclone was in 1987 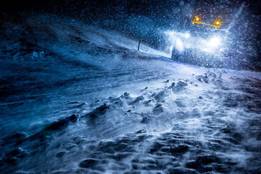 Stock up on groceries and vocabulary.