: a wrestling throw in which the opponent's body is lifted and brought down hard to the mat Showing immense strength, Halsey threw his 185-pound opponent on his back a couple of times, setting up his submission with a body slam that drew a gasp from the crowd.— John Spencer, Mansfield (Ohio) News Journal, 20 Nov. 2012 —sometimes used figuratively Rebuilding is part of the American spirit. We are not a nation of quitters who turn and run after Mother Nature delivers a body slam.— editorial, Pittsburgh Post-Gazette, 11 Sept. 2005… the overall markets, which have taken a full-bore postelection body slam in recent days, starting with the Dow plunging more than 300 points the day following President Barack Obama's victory at the polls. — Patrick May, Contra Costa Times (California), 15 Nov. 2012

Other Words from body slam

First Known Use of body slam

The first known use of body slam was in 1899 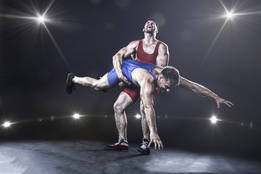 Time to body slam your wrestling buddies with some knowledge.