Note: Middle English gleien has been compared with Old Norse gljá "to shine, glisten," though this latter meaning is only attested once for gleien and scarcely seems to account for the "squint" sense. Initial gl- in Germanic languages in any case appears to have had phonesthemic value, perhaps suggesting both movement of the eyes and radiation of light. Gleien may hence be an entirely new formation.

1785, in the meaning defined above 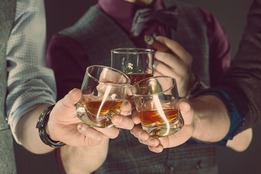 Celebrate the Scottish poet with a list of words popularized by his poetry.