This year, for the first time, Merriam-Webster has named a suffix as its Word of the Year, reflecting the fact that many of Merriam-Webster’s highest ranking words this year had one thing in common: they ended in -ism. 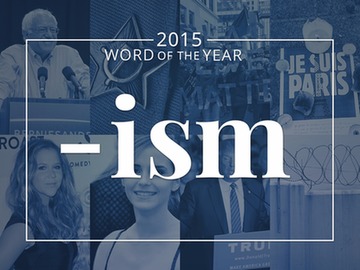 Merriam-Webster’s Word of the Year is determined using two simple criteria: the words must show a high volume of lookups and a significant year-over-year increase in lookups at Merriam-Webster.com. The results shed light on topics and ideas that sparked the nation’s interest in 2015—and in 2015, it was clear that we had a lot of serious issues on our minds.

The words we look up reveal our curiosity, and are the beginning of reflection. People turn to the dictionary for spellings and meanings, it’s true, but it’s also clear that many people come to learn nuances and details about words they use and hear every day. A definition can help us form thoughts or serve as a point of departure for reflection; words like love, grace, and hero are among the most looked-up words daily.

A second group shows what other words sent people to the dictionary in 2015:

We have details about all the lookups, and the events that triggered them, at our Word of the Year 2015 Gallery.

And go behind the scenes with editor-at-large Peter Sokolowski talking about the 2015 Word of the Year and what it all means to us.