Is it time to accept 'woah' as an acceptable spelling of 'whoa'?

Woah is not yet in the Merriam-Webster Dictionary as an official spelling variant of whoa, but its usage has increased dramatically in the current century. "Whoa" is still much more common however, so only time will tell if this spelling variant is accepted.

Some time ago, the ACLU asked us to weigh in on something:

We don't include that as a variant, but we're pretty sure you still have the right to say it. https://t.co/5iJqqQFHpM 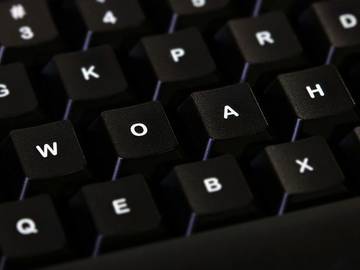 Oh, it's nowhere near as common as whoa, that's true. But is it an established variant? This article is an investigation of just that.

The spelling variants we include in our dictionaries are, like the words and their definitions, based on evidence, and primarily on evidence as found in published, edited text. It's not that the language as it's used outside of published, edited text is less effective in communicating; it's that looking at the language as it's used in published, edited text provides a scope for our work that is both useful to our readers and possible for our lexicographers. We can't scan the Facebook threads of millions of speakers of English for variant spellings, and most of you likely care more about whether a particular spelling has met the editorial standards of the likes of Forbes and The Atlantic than those of your cousin Steve. Is a particular spelling regarded as an error by the people whose jobs it is to consider such things? That's the question we answer.

What Does Whoa Mean?

But on to woah: the story starts with farm animals. Animals don't speak, but people speak to them, and the words people use to speak to animals qualify for dictionary entry if there's enough print evidence of those words being used.

In this dictionary you will find an entry for whoa, in which the word is defined with the following:

1 —a command (as to a draft animal) to stand still

2 : cease or slow a course of action or a line of thought : pause to consider or reconsider —often used to express a strong reaction (such as alarm or astonishment)

Although print evidence of whoa in use dates to the 15th century, the word was not common enough to be included in Noah Webster's 1828 An American Dictionary of the English Language. But it was entered in the 1864 dictionary that superseded it. In An American Dictionary of the English Language, Unabridged an entry for whoa directed the reader to ho (also styled as hoa) which was defined as an interjection with the jarringly exclamation-marked "stop! stand still! hold!," and the notes "a word used by teamsters in stopping their teams" and "written also whoa." Webster had included ho too, categorizing it as an exclamation, and defining it as "a word used by teamsters, to stop their teams. It has been used as a noun, for stop, moderation, bounds." Ho no longer carries this meaning commonly enough to be included in this dictionary, but an entry for injectional use still exists: "used especially to attract attention to something specified," as in "land ho."

Ho died out, and whoa stepped in—and long before the time of spelling standardization. Looking at the entry for whoa in the historical Oxford English Dictionary, which includes examples tracing the word from its earliest use and into the current century, we see a variety of spellings employed: whoo, who, whoe, woyh, whoh, wo, woo, woa, and, with the first example from a 1790 source identified only as Merry Companion, woah. In the late 19th century, the word developed its more common modern use (sense 2 above), as in "Whoa, that's interesting."

The spelling woah has likely been simmering since the late 18th century, mostly not making it into published works. In the late 20th century, though, that started to change. Since the 1990s especially, woah has been making inroads into formerly whoa-exclusive territory, with the Lexis-Nexis "All English Language News" database showing woah start to appear in news transcripts and a few major newspapers as the century reached its close.

In the current century, woah has continued to grow in prevalence. It's always been more common in non-US English sources, but we've spotted it in stateside magazines like The Atlantic, PC Magazine, and U.S. News & World Report, and in the nation's best newspapers, including The Denver Post, The New York Times, The Boston Globe, The Miami Herald, The Sacramento Bee, and The Kansas City Star.

Part of what is going on with the story of woah and whoa is that informal interjectional uses are making it into published, edited text far more frequently than they used to. While woah is about as common as whoa was at the end of the 20th century, whoa is by some estimations now more than five times as common as it was back then. What is even more telling is that the sources in which woah appears have many more examples of whoa than they do of woah. It looks like woah is just occasionally slipping in.

What does all this mean? It means that the story of woah is still in flux, but that current evidence shows that it's not yet an established spelling variant in US English. For now, we're going to stick with the more common spelling. Whoa.