A version of the image is everywhere: a family is gathered together—at the kitchen table, in the living room, in the car—and each face is aglow in the light of a screen. There is, of course, a name for it. Technoference refers to the interruptions in interpersonal communication caused by attention paid to personal technological devices. In other words, it's that thing where you're looking at your phone or tablet and don't hear the question your kid or your friend or your mom or your boyfriend asked you. Even though you were totally listening. 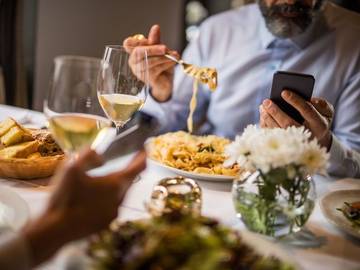 These emails aren't going to delete themselves during dinnertime.

The term is credited to Brandon McDaniel, an assistant professor of Human Development and Family Science at Illinois State University, and it's getting some attention in the news:

McDaniel coined the term "technoference"—encompassing things like checking phones for text messages and notifications during meals, playtime or other routine activities—and found that even low amounts of it are associated with higher levels of behavioral problems in the respondents' children.
— Esther Cepeda, syndicated column, 2 Feb. 2018

The word's ancestry is clear: techno- means "technical" or "technological" and -ference is from interference. Interference is from interfere, which has its origins in an Anglo-French word meaning "to strike one another." The prefix techno- is taken from the word technological. That word was borrowed from Greek in the early 19th century, from the word technologia, meaning "systematic treatment of an art," itself from technē, meaning "art, skill," and -logia, meaning "-logy," with an "o" thrown in to make it all flow.

We don't doubt that some technoference has at one point or another led to fisticuffs, but it's more often seen as a source of subtler trouble. McDaniel himself addresses technoference specifically as it affects parent-child relationships and as it affects romantic relationships (spoiler: it doesn't affect either for the better), and the media is starting to pay attention:

The findings showed that even low or seemingly "normal" amounts of technoference were associated with more behavioral problems in participants' children. However, the study didn't prove a cause-and-effect relationship, just that an association existed.
— Maureen Salamon, UPI (upi.com), 15 June 2017

About three in four women said they believe cell phones "detract from their interactions" with their spouse or partner. Such "technoference" often jump-starts a negative cycle. It can cause more tech-related distractions, which may hurt the relationship, drive down "life satisfaction" and raise the risk of depression.
— Annie Knox, The Salt Lake Tribune, 4 Dec. 2014

Technoference covers territory that another word we're watching also deals with. Phubbing is the act of paying attention to your phone rather than to the person you're with—it's snubbing someone, but with your phone as your accomplice. Technoference applies more broadly to distraction by technological devices in general. (Which is totally okay if you're looking at dictionary websites.)