Side-hustle is a word on the move, and we are watching it. Although the precise definition of this term is still in a bit of flux, it appears to be centering on “work performed for income supplementary to one’s primary job.” It serves as a fine example of how a word may be in consistent but limited use for some considerable length of time, remaining mostly dormant, before taking off when it fits some linguistic need. 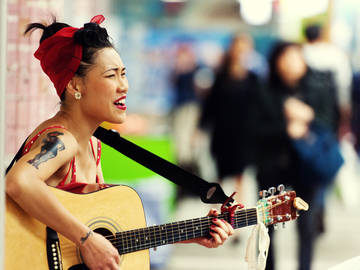 'Side hustle' appears to have entered our language in the 1950s, when it was used to describe both scams and legitimate jobs.

The origin of the side-hustle is both obvious and opaque; it comes from hustle (that’s the obvious part), but this word has had a number of delicately shaded meanings (the opaque part) over the past few centuries, many of which are quite similar in meaning.

Hustle comes from the Dutch word husselen, meaning “to shake,” reflected in the earliest use of the word in English, as a verb, with much the same meaning. The verb soon took on extended meanings, including “to crowd or push roughly,” “to obtain by energetic activity,” and “to obtain money by fraud or deception.” The noun use of hustle followed a path similar to that of the verb, moving from “ an act of jostling” to “a job” and “a swindle.”

The use of hustle referring to “a swindle” appears to have entered our language (in printed form at least) in the 1920s, and for the next several decades is found almost exclusively in African-American newspapers.

We don’t have to believe what Garvey says, nor do we have to give him our money if we don’t want to, but we must give him credit for putting on a hustle, especially in view of the fact that the “panic” was on when he started out to bring the S. S. Booker T. Washington in.
—Professor Fudge, The Afro-American (Baltimore, MD), 7 Feb. 1925

While standing there wondering what ruse I should use to gain entrance, I heard a dignified chap vociferously remark: “Ten cents to see Jesus is a hustle.”
—Roi Ottley, New York Amsterdam News, 5 May 1934

He charged that when Dr. Pearson told Mr. Murray that he would be given a scholarship, if he attended Howard University and on the witness stand admitted that no such scholarship would have been given, the president was admitting that he was giving the applicant a “hustle.”
—The Afro-American (Baltimore, MD), 22 Jun. 1935

At about the same time the word began to also be used in a non-judgmental sense, referring simply to an attempt to make money, and not an attempt to fleece someone.

Now the construction put on that answer of mine by the people to whom I told the story was the reason that I said to her that she didn’t need me was because if she didn’t get it, it eliminated my chance for a hustle.
—Henry Teenan Jones, The Chicago Defender, 18 Nov. 1933

Jim, with the odd faculty good southern boys have for organizing a “hustle” or proposition, formed what we called the American Giants Booster Club and employed the peculiar talents of on King Jones, then the nation’s first great Oxford Gray master of ceremonies employed at the old Royal Gardens where King Joe Oliver and Louie Armstrong were making musical history.
—Dan Burley, The New York Amsterdam news, 8 Apr. 1944

By the 1950s we see the hustle modified by side, and again, the use from this time is exclusively found in African-American newspapers. In its initial use side-hustle appears to have been applied to both a scam and a legitimate job; the four citations below are split evenly between these two meanings.

Alex Barnes of the Capitol Times was doing a public relations job at the conference as a side hustle.
—The Chicago Defender, 12 Aug. 1950

That Broad and Market sts. area shoe shine boy whose lucrative side-"hustle" is "smotheing" numbers bets. He stashes the slips in a slot in his box.
—Sam Early, The Philadelphia Tribune, 19 Jun. 1956

That well-known Chicago Scoutmaster and church official whose friends are unaware of his lucrative side-hustle. Once he’s away from his Boy Scouts and church cronies he dons a colorful costume, pulls out a crystal ball, and becomes a “Prophet” who sells numbers and gives spiritual advice to all who pay his fat fee.
—Masco Young, The Pittsburgh Courier, 18 Jan. 1958

Side-hustle has been in regular use now for almost 70 years, although it is only in the last two decades that considerable attention has been paid to the word. This is attributable in part to the fact that many African-American texts (such as The Chicago Defender) have been under-documented, and also due to the word seeing greatly increased use in the Internet age.

Although it may occasionally be found used in reference to the “scam” sense of hustle, the side-hustle of today is predominantly employed in the “job” sense.

"Every millennial I know has a side hustle or two," said Avalon, who does freelance design work, editing work and writing. "I don't know anybody who has one job and makes a living at it.”
—Bill Vogrin, The New York Times, 26 Mar. 2017

As further evidence of how far the hustle in question has traveled from its “scam” roots, one of our most recent citations is describing a not-very-hustler-like activity as a side-hustle.

Kutthroat does cross-stitch as a side hustle.
—Laura Beeston, The Toronto Star, 14 Mar. 2017