We have our eyes on this one

Chances are you've been on both ends of the side-eye. It's that sidelong look, that glance or gaze that doesn't want to involve the front of the face, but instead says way more by shifting to the corners of the looker's eyes. 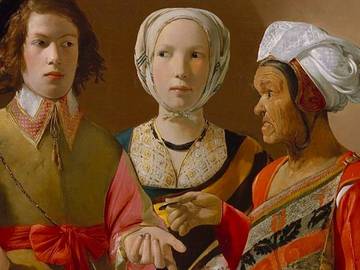 There's some debate about whether or not a turn of the head disqualifies a sidelong glance from being side-eye. Some say you have to keep your head steady and straight ahead and do it all with your eyes.

People have of course been using side-eye forever, but the term side-eye (also styled side eye) is only newly popular. Since the end of the first decade of the 21st century it's been increasingly used in major publications.

At its core, the term is about a physical act that communicates any number of things: suspicion, scorn, annoyance, jealousy, veiled curiosity. When we use the word, the context explains what the look being referred to expresses:

It’s this friendship, presented with utter sincerity, that serves as the movie’s emotional rudder. Though there’s humor in the unexpected pairing, the actors play it with the innocence of children who do not yet count the judging side-eye as part of their vocabularies.
— Eliza Berman, Time, 18 Mar. 2016

The guy who stole your heart as the class clown can seem like just a clown out of his original context, like when people are giving him side-eye for cracking lame jokes in the hostess line. — Lauren Panariello, Cosmopolitan, July 2014

NZ comedian Steve Wrigley later commented that Kiwis have a unique habit of laughing enthusiastically, while at the same time sounding like they aren't sure if they should be, and shooting a sneaky side-eye at their neighbours to make sure they are laughing too.
—The Dominion Post (Wellington, New Zealand), 27 Apr. 2010

It's often (and increasingly) used with the:

For the most part, the singular focus on results washes away concerns about getting the side-eye from a colleague judging you for not being in your cubicle, said Jack O'Laughlin, executive director of employment experiences at Edmunds.
—Alexia Elejalde-Ruiz, The Chicago Tribune, 18 Mar. 2016

Suddenly, Eddie … is attracting the attention of barons of the boardroom …, bullies on the street … and some mysterious third guy who keeps giving him the side eye and chasing him around Manhattan.
—Cary Darling, The Detroit Free Press, 18 Mar. 2011

Newly ubiquitous though the word may be, it's not a new term at all. James Joyce used it in Ulysses, published in 1922:

A side eye at my Hamlet hat. If I were suddenly naked here as I sit? I am not. Across the sands of all the world, followed by the sun's flaming sword, to the west, trekking to evening lands.

But he was by no means the first. Our earliest evidence of side-eye in use is from 1797:

Here we come to what calls for the strongest eye-sight, the most steadfast gazing. Our being in Adam has been looked on with a side eye. The subject has provoked dislike; I may almost say, contempt. It is now painful to speak of it. — Remembrancer For Lord's Day Evenings, 19 Mar. 1797

We've also seen some evidence of verb use, with the earliest example dating to 1916, but most evidence dating to the current decade:

In his mind's-eye he saw himself associating with actor-folk, who invariably side-eye him and whispered among themselves: "That's Alonzo Gubbins—frightfully wealthy—just about the real backing of the Frohman ventures--though, of course, Frohman is putting up the name and reputation!"
—The Arizona Republican, 26 Aug. 1916

I naturally and perpetually side-eye every woman who can rock a pointed-toe shoe with ease. How divine your black, nude or brightly colored shoe looks on your tiny foot.
—Lauren Porter, Essence, 23 Mar. 2016

One other thing about side-eye: in these modern times, there's some debate about what exactly side-eye is—in particular, about whether or not a turn of the head disqualifies a sidelong glance from being side-eye. Some say you have to keep your head steady and straight ahead and do it all with your eyes.

From a lexicographer's perspective, the jury is very much still out on that. If people refer to both versions as side-eye, then both versions qualify. We'll see if that changes. In the meanwhile, throw side-eye however you like. We won't take it personally.

*Words We're Watching* talks about words we are increasingly seeing in use but that have not yet met our criteria for entry.