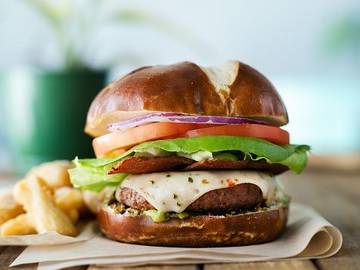 It sure looks and tastes like a real word.

One of the many difficulties involved in creating and maintaining a dictionary is that new words keep cropping up, and needing to be entered. Adding to this difficulty is that some of these words are not born in a semantically pure state; it often takes a number of years of a word being used before the majority of people who use it come to an agreement as to what it means. A fine example of this may be found in a word we are watching, plant-based.

Though some people, including food bloggers, may use the terms "plant-based" and "vegan" interchangeably, plant-based is an "umbrella term" and does not equate to being vegan, added Kimberlain, who is also a national spokesperson for the Academy of Nutrition and Dietetics.
— Lisa Drayer, CNN Wire Service, 6 Feb. 2020

Rachel, who used to work for Marks & Spencer, said: "It's clear in the name of our business that we are selling dairy-free products — it's a pun. Our tagline also clearly states we are a 'plant-based cheesemonger’. People are generally aware that plant-based means non-dairy. Peanut butter doesn't include butter.”
— Valentine Low, The Times (London, Eng.), 18 Feb. 2019

Plant-based means you avoid any products that derive from animal sources such as meat, fish, dairy, eggs and honey.
— Simon Houston, The Sun (London, Eng.), 7 Dec. 2018

The use of the term "plant-based," throughout research studies, restaurants, and the media, has proven to be inconsistent. Based on our research, the definitions vary widely and cannot be assumed to be vegetarian or vegan.
— Casey Brown et al., Vegetarian Journal (Baltimore, MD), 2018

Plant-based is showing greatly increased use, in a variety of settings. It is routinely applied to meat substitutes, and to non-food stuffs which contain no animal products.

To give customers a healthier choice, the company offers a line of natural plant-based interior paints from pigments created in Hawaii and Germany and manufactured for Armstrong by an outside company.
— Cecily Burt, Oakland Tribune, 3 Jun. 2004

However, over the several decades that plant-based has been in use, it has come to mean different things to different people. Some use it synonymously with the adjectival form of vegan, others think it is closer to vegetarian (insofar as something plant-based may contain animal products, such as dairy or eggs, although no flesh), while others still employ the word in a self-explanatory fashion, reasoning that any food or product which is largely based on plants deserves this label.

Our earliest records of plant-based, beginning in the mid-1970s, seem to indicate that it was often intended to have a meaning close to vegan, as plant-based diets were seen as distinct from those that contained dairy or eggs.

His book is the usual attack on meat-eating, but a new argument is added: the ecological and economic necessities for giving up breeding, slaughtering and eating animals, and for turning to an exclusively plant-based diet.
— Medical History (London, Eng.), 1 Jul. 1976

“Plant-based diets supplemented with milk or with milk and eggs tend to be nutritionally similar to diets vmntaining (sic) meats.
— Call and Post (Cleveland, OH), 4 Nov. 1978

The best advice for preventing osteoporosis would probably stress a shift toward a plant-based diet (sound advice from many points of view), rather than the increased intake of dairy foods emphasized by Mrs. Brody.
— Michelle Marder Kamhi (letter to Ed.), The New York Times, 22 Oct. 1980

In subsequent decades plant-based has come to be employed in a looser fashion by many people. In many instances it can be difficult to say why speakers choose to distinguish between vegan and plant-based; possible reasons include a perceived animus toward vegans, or the desire to be semantically precise.

Rather than use the term “vegan” and “vegetarian,” EarthSave promotes “plant-based diets.” Instead of promoting a distinct and sharp dividing line between meat-eaters and vegetarians, EarthSave advocates prefer the idea that all people are eating more or less plant-based diets.
— Donna J. Maurer, The Vegetarian Movement in North America (PhD diss.), 1997

Still, the Gippsland speed demon insists he's no vegan pin-up. "I like to say I'm more a plant-based diet rather than vegan; I do play a sport that uses leather and that type of thing," he said.
— Eliza Sewell Melbourne, The Advertiser (Adelaide, Aus.), 26 Dec. 2013

In spite of the fact that we are still figuring out what exactly plant-based means, the word is moving steadily in the direction of being entered in our dictionary. After all, we have repeatedly demonstrated that we are able to use and understand words which have a number of closely-related-yet-distinct meanings.

"The response in Atlanta continues to underscore the growing consumer demand for high-quality, delicious plant-based meats," said Ethan Brown, Beyond Meat CEO and founder, in the release. "Together with KFC's team, we have created a plant-based chicken that looks, tastes and pulls apart like a chicken breast.”
— Kelly Tyko, USA Today (online), 29 Jan. 2020

One of the more common uses of plant-based is to describe a type of meat. This is a word which may be defined as “animal tissue considered especially as food,” “the edible part of a nut, fruit, or egg,” or simply “solid food as distinguished from drink.” Plant-based may end up having a single meaning, or it may end up like meat, and contain multitudes.