Paraphrasing in a cut-and-paste world

At summer’s end, nights get a bit longer and cooler, campers say goodbye to newfound friends, students are taken shopping for new clothes, and, before the leaves start to turn, one more thing is certain: lookups for the word plagiarism will spike in the dictionary.

Plagiarism and back-to-school are intrinsically linked for a good reason: at school and college orientations all over the country, policies concerning academic honesty are presented in official and legalistic terms—as well they should be. Honesty in research and study is a pillar of organized education. The research itself is increasingly being done online, which may lead to a very modern problem within this very traditional framework: when writing a paper using online sources, it is all too easy to copy. And paste. 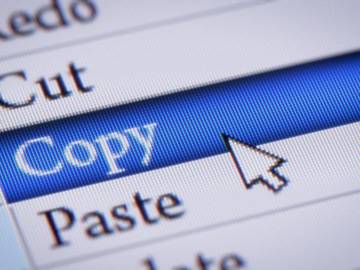 'Patchwriting' refers to the act of making small changes and substitutions to copied source material.

But this ease of copying, while it certainly may encourage a lazy kind of deliberate plagiarism, may also reveal another consequence of this kind of internet-based research for keyboard-based composition: many students may be running before they can walk, in academic terms, and don’t yet understand the basics of scholarly attribution. In such cases, it seems that a new gray area has evolved, one that requires an intermediate term for text that is discovered to have been clearly copied and, though the work may be sloppy and deserve a low grade, there is no motivation of deliberate deception.

Just such a term was coined by writing professor Rebecca Moore Howard: patchwriting. In a 1993 article, she proposed the following definition:

Copying from a source text and then deleting some words, altering grammatical structures, or plugging in one-for-one synonym-substitutes.

Professor Howard elaborates further in an article from 1995:

Because patchwriting can result from a student's inexperience with conventions of academic writing, instruction in quotation and source attribution and a request for subsequent revision of the paper may be an appropriate response for the instructor. But because patchwriting often results from a student's unfamiliarity with the words and ideas of a source text, instruction in the material discussed in the source and a request for subsequent revision of the paper is even more frequently the appropriate response. Patchwriting can also be the result of a student's intent to deceive, in which case the minimum penalty is an "F" in the course and the maximum penalty, suspension from the university.

This final point is significant, because she is using the term in its “intermediate” sense only when referring to student work that can be revised. Educators encounter many such instances of essentially honest students who either don’t fully understand a text or haven’t mastered rhetorical restatement, and fall into the trap of using too much verbatim source material in this way. In other words, patchwriting can describe a less judgmental midpoint that can be seen as a “teachable moment” rather than an all-or-nothing accusation of plagiarism (which might, of course, bewilder and discourage a student). Indeed, specialized academic writing is often full of subject-specific vocabulary and expressions that must be acquired by students entering the field, and modeling their writing on that of published scholars is exactly what they need to do before they can produce competent scholarly writing of their own. Sometimes patchwriting represents useful training wheels for inexperienced writers.

But in serious academic writing, it’s clear that patchwriting is more problematic:

In academia, patchwriting is considered an offense equal to that of plagiarism. If [Jonathan] Lethem had submitted this as a senior thesis or dissertation chapter, he'd be shown the door.
— Kenneth Goldsmith, The Chronicle of Higher Education, 11 September 2011

Clearly, correct attribution and paraphrasing are important lessons to be learned, and not just in academia, but also in journalism: the Poynter Institute has been watching patchwriting in its coverage of the profession:

Rather than copying a statement word for word, the writer is rearranging phrases and changing tenses, but is relying too heavily on the vocabulary and syntax of the source material. It’s a form of intellectual dishonesty that indicates that the writer is not actually thinking for herself.
— Kelly McBride, “'Patchwriting' is more common than plagiarism, just as dishonest,” poynter.org, 18 September 2012

The Poynter Institute has even created a handy flow chart to help journalists and editors identify plagiarism, patchwriting, and theft of ideas. Their description contains a definition of patchwriting that is similar to Professor Howard’s:

If a journalist has mirrored the language of another author save for a few word substitutions, they may be guilty of patchwriting. This is a lesser charge than plagiarism if the original author is credited.

Watching the evolution of this phenomenon—and the new word used to describe it—has been the mission of The Citation Project, led by Professor Howard and Professor Sandra Jamieson. Their updated definition of patchwriting:

restating a phrase, clause, or one or more sentences while staying close to the language or syntax of the source

Of course, in order for a term to be entered in a dictionary, it must show widespread and increasing use with a consistent meaning; we then derive the definition from a careful assessment of many citations. Even in the rare instances when the coiner of a given word is known, we don’t use their own wording of the definition of the term, since it represents only one point of view for a word that has become widely adopted.

Besides, that would be cheating.