Drawn from a book title, the phrase has taken on a broader meaning

If you've paid any attention to business in the last few years, it's likely that you've heard a lot about leaning in. Headlines and book titles encourage us to "lean in to innovation," or tell companies to "lean in," or detail education "without leaning in." What's with all the leaning? 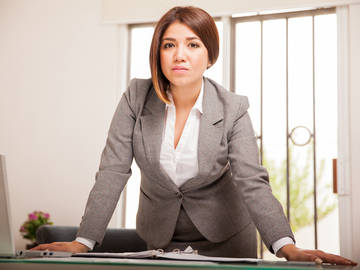 One Guardian headline read: "The 'Lean In' generation have become addicted to work. It has to stop"

Lean in became a business motto in 2013, taken from the title of the book Lean In: Women, Work, and the Will to Lead written by Sheryl Sandberg, the Chief Operating Officer of Facebook, and Nell Scovell, a writer and Sandberg's collaborator. Sandberg's book outlines business strategies to help women achieve success, and its title perfectly paints a picture of what Sandberg believes women need to do to move up in the business world: to press ahead, to project confidence, to "sit at the table" and physically lean in to make herself heard.

Sandberg's book came out in the midst of a broader discussion regarding the work/life balance of women in corporate America, and while it became a bestseller, it also garnered a fair amount of criticism. (In fact, Sandberg herself admitted in 2016 that advice she gave in her book did not take into account the difficulty single mothers faced when trying to advance their careers). The words lean in became lexical shorthand for the act or process of a woman's asserting herself in the workplace:

If you are leaning in, as Sheryl Sandberg uses the term, you'll seize the opportunity to be promoted to the next level even if the chance comes when you have small children and you might have a tougher time juggling work and family in your new role.
— Katherine Lewis, "What Does 'Leaning In' Look Like For Working Moms?", About.com, 29 Jan. 2016

The faster my career accelerated at Facebook, the more my financial returns diminished, until my workload was being elevated but not my salary or equity. Leaning in, then, starts to look like it can benefit companies more than it benefits workers, if companies, while asking that their women employees "lean in," refuse to commit to equitable pay.
— Kate Losse, Dissent Magazine, 26 March 2013

It didn't take long for lean in to gain another meaning, referring to broader steps or processes that encourage women in the workplace, regardless of whether those steps or processes are initiated by women. Yes, Sandberg later said—men should lean in:

Two years ago, I wrote a book that encouraged women to lean in. Maybe you've heard the phrase. Maybe you had no idea what it meant. Or maybe you steered clear of the whole concept because you didn't think it applied to men. Actually, it does. You — a man — can lean in, too.
— Sheryl Sandberg, Esquire Magazine, 12 March 2015

Lean in has even begun to be used as an attributive noun:

The 'Lean In' generation have become addicted to work. It has to stop
— Guardian.com headline, 10 March 2015

While lean in is certainly gaining currency, it doesn't yet have the widespread and sustained use necessary to be entered into the dictionary.