Not just lying around

You may be familiar with the sense of laze meaning "to act or lie lazily : to idle".

No, I don't like work. I had rather laze about and think of all the fine things that can be done.
— Joseph Conrad, Heart of Darkness, 1899

It's been a part of English since the late 1500s, after all. In the last month or so, a newer, much busier sense of this word has gained tremendous attention. 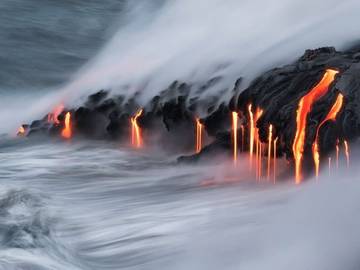 It's busier, but a lot less fun on vacation.

The recent eruption of Kilauea in Hawaii has produced enormous amounts of another type of "laze" (often glossed as "lava haze"):

This is not a brand new word (we have seen sporadic evidence going back decades), but usage has spiked tremendously since Kilauea erupted at the beginning of May.

But it was the newly discovered threat of “laze” (lava haze), not vog (volcanic smog), that most interested the task force.
— Honolulu Star-Bulletin (Honolulu, HI), 21 Mar. 1990

We typically remain neutral and "root for" all of these new words to gain traction in a detached, academic fashion. But perhaps, for the health and safety of our Hawaiian friends, we'll hold out hope that the immediate need for this one fades away for a while.