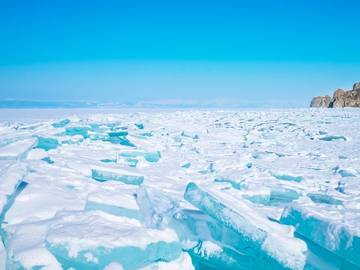 With climate science increasingly in the news, 'cryosphere' has seen a large uptick in citations over the past few years.

Cryosphere may not be in the working vocabulary of most speakers of English—yet—but that could be changing:

The world's oceans and mountains are in peril, and so are we, according to a major new report from United Nations climate scientists released early Wednesday. The "Special Report on Oceans and the Cryosphere" offers a bleak picture. It warns that the world's oceans have reached or are nearing critical tipping points: Oceans have gotten warmer, more acidic and are losing oxygen, resulting in a cascade of negative effects that are wreaking havoc on coral and other marine ecosystems, threatening the collapse of the world's fisheries and turbocharging deadly hurricanes and tropical storms.
— Janet Wilson and Doyle Rice, USA Today, 25 Sept. 2019

… as humans continue to pump global-warming causing gases into the air, oceans are playing a role shaping all of human civilization, according to a new report from the United Nations’ climate science body. “The world’s ocean and cryosphere have been taking the heat for climate change for decades,” says Ko Barrett, a vice chair of the IPCC [Intergovernmental Panel on Climate Change]. “The consequences for nature and humanity are sweeping and severe.” … The report also addresses the effects of climate change on what’s known as the cryosphere, or frozen water. Changes to ice coverage in the Arctic are “likely unprecedented for at least 1,000 years,” according to the report.
— Justin Worland, Time, 25 Sept. 2019

Cryosphere, in broadest terms, refers to any part of the planet's surface where there's a significant amount of frozen water; in narrower use, however, the word is used to refer to all of those parts considered as a single system.

While cryosphere dates to the early part of the 20th century, it's been sparsely used in the kinds of texts that qualify a word for entry until recent years. With climate science increasingly in the news, however, the word is rising in prominence and will likely be added to the Merriam-Webster.com dictionary in the next update.

The cryo- in cryosphere means "cold" or "freezing," and comes from Greek krýos, meaning "icy cold, frost." It's also found in such words as cryogenics ("a branch of physics that deals with the production and effects of very low temperatures") and cryobiology ("the study of the effects of extremely low temperature on living organisms and cells").

The -sphere in this case means "zone, layer or region enveloping or radiating from the earth or another celestial body." It's most familiar in atmosphere, which refers to the whole mass of air surrounding the planet, but it also appears in others terms mostly encountered in only technical contexts. Lithosphere refers most specifically to the rocky outer part of the planet, and hydrosphere refers most broadly to all of the planet's water; this includes all bodies of water, the water vapor in the atmosphere, and often the cryosphere as well.