A word for the sound of silence

Crickets are often used by writers to convey atmosphere or to create a sense of place. That is, not the insects themselves, but rather the sound that crickets make. The chirping of crickets is the sound of nature on a summer night, and it has become a kind of cultural shorthand that indicates much with a single word: the setting is far from the city and far from people. Using crickets to convey this rural atmosphere is usually done in sentences like these:

Then it was still, and even the crickets were shocked into silence by the blast.

Full night had fallen now, and the sound of crickets and frogs rose like a soft chorus behind them. 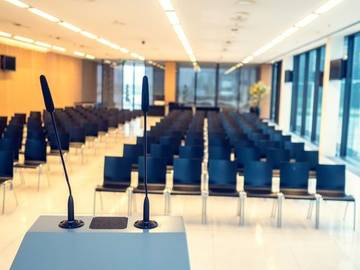 In its most recent extended use, 'crickets' has become a word for "silence."

Over time, crickets became an image used not just in writing but cinematic shorthand for quiet country locations, sometimes used to stand for a generalized sense of open emptiness. (Tumbleweeds is also sometimes used in this figurative way). Here’s an excerpt from the script for Gothika, a film starring Halle Berry made in 2003:

EXT. PARKING LOT - NIGHT # Dead quiet. CRICKETS CHIRP or whatever it is crickets do.

Chirp. Chirp. Yep, that’s the sound of crickets. If I knew the sound a black hole makes, I would have typed that, because there’s not much worth saving on the alphabet network.
— Pittsburgh Post-Gazette, 23 Dec. 2001

There was a silence long enough to hear crickets in, and Agnes thought, If he makes some crack about me being not little, I'm gonna hit him again, and then he spoke.
— Jennifer Crusie and Bob Mayer, Agnes and the Hitman, 2007

This silence was very often the specific sound of an audience that is not clapping, understood as disapproval:

There’s always the possibility that he’ll bomb. He describes it as the audience getting so quiet “you can hear crickets” on the stage.
— The Philadelphia Inquirer, 10 Sept. 2000

How about a show of applause, so the audience at home can hear. (APPLAUSE) HARRIS: All right, all right. How many do you think this is a great idea? A show of applause. Ooh, I hear crickets now.
— "Talkback," CNN, 30 Aug. 2002

At the Loews Theaters at Roosevelt Field last weekend during the opening of "X2," one could hear the sound of > crickets in the deafening silence that followed the preview for "The Hulk," while during "The Matrix Reloaded" clapping and cheering nearly drowned out the preview for the futuristic saga, the Goliath of the summer season.
— Newsday (New York), 11 May 2003

Crickets has also evolved from meaning the silence of an assembled crowd to a more generalized quiet, expressing the lack of any interest or response:

The Gophers marketing department is going to have to find a way to make inroads with the younger crowd. If not, 10 years from now the team will be playing to the sound of crickets in their new, empty stadium.
— The Des Moines Register, 5 Dec. 2002

I just want to point out, behind you there's a crazy crowd of people waving, and I can't help but remember yesterday when Blake Shelton was here and he looked out the window, and sure enough it was crickets. There was nobody standing outside.
— Hoda Kotb interviews Martina McBride, NBC, 24 Aug. 2010

On a USA Hockey goaltending conference call last year, the 25 or so participants were asked if they had experience with sled goalies. “It was pretty much crickets except for me,” [Jason] Wolfe said in a telephone interview.
— Ben Shpigel, The New York Times, 10 March 2018

And, in perhaps the final step in this evolution, crickets requires no context or explanation or gloss at all—just the word itself is enough to convey the meaning “silence”:

“Woolgathering,” I said, eyeing Dr. Takemago for her response. Crickets. She continued to watch Keane for some time, clearly agitated. Her hands were clutched in fists at her sides.
— Robert Kroese, The Big Sheep, 2017

INT. DICTIONARY OFFICE - DAY # Dead quiet. Lexicographer holds for applause, or whatever it is blog readers do...