It shows up earlier and earlier every year.

Most people can figure out what is meant by the term Christmas creep, even if they've never heard it before—and they're pretty sure it refers neither to an unsightly rash nor an overbearing uncle. Christmas creep is the gradual lengthening of the Christmas season, with ever earlier displays of lights, wreaths, and decorated trees, insistent advertisements of holiday sales for consumerist profiteering, and the familiar sound of songs that everybody knows but which should never be heard in public places during the month of October. 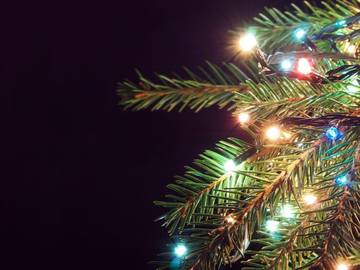 Christmas creep, much like the phenomenon it refers to, tends to be found in autumn. It seems to never be employed in celebratory fashion (‘Yay! Christmas creep came even earlier this year!’), but rather functions as a shorthand for the existential dread and disgust that many people feel at the apparent increasing commercialization and banality of the season.

At the same time, Christmas Creep has arrived even earlier than usual this year. While flipping channels the other day, I discovered one network - one of the ones that airs frothy movies featuring actors who get charged in college-admission scandals - promising/threatening to show daily Christmas flicks beginning Nov. 1.
— Jack Knox, Times Colonist (Victoria, B.C.), 27 Oct. 2019

But with some retailers, Christmas creep has morphed into what I call "holiday hurry-up," defined (by me) as what you'd get if Halloween, Thanksgiving, Christmas and New Year's Eve all got together, had a debauched party, got plastered and threw up all over a store the last week of August.
— Florida Today (Melbourne, FL), 22 Sept. 2019

It’s even used when discussing other seasons that are forced upon consumers too early:

Think Christmas creep, but orange: A slew of pumpkin-flavoured products inspired by fall are turning up earlier each year, arriving in July and August as a harbinger of a season that this year doesn’t officially begin until Sept. 22.
— Tiffany Hsu, The New York Times, 30 August 2017

Origins of the Phrase

It’s hard to know exactly when this phenomenon began (it may be connected with the invention of the shopping mall), but use of the phrase goes back to at least the 1980s:

Toward the end of each year I watch for signs, in the form of advertisements, that Christmas is approaching. Each year, the signs come earlier and earlier; I call it the Christmas Creep.
— John E. Rowan, (letter) Newsday (Long Island, NY), 26 Aug. 1981

Do the seasonal bells and whistles spur consumers to pry open their wallet early, or merely create a backlash? That’s tough to say, but, regardless of its effect, Christmas creep is fun to grouse about.
— Martha Groves, Los Angeles Times, 17 Nov. 1986

And just to prove that we weren’t just trying to be cute with the “shopping mall” reference, note that an early use of a similar phrase dates to just four years after the first mall opened in the United States:

Creeping Christmas. To the Editor of the Gazette: Merchants in our town seem to be suffering from a disease known as “creeping Christmas.” Each year, Christmas decorations appear in department store windows just a little bit earlier than the year before.
— “The Indignant Pilgrim,” (letter) The Arkansas Gazette (Little Rock, Ak), 27 Nov. 1960

Let us, checkbook in hand, go joyfully caroling amidst the gaily lit stores of Santa Cost Lane, or everwhat they call it, and say no more about Creeping Christmas.
— Bob Wells, The Independent (Long Beach, CA), 6 Dec. 1961

An amusing earlier use shows a different sense of the noun creep used in the same phrase, but here it means “a slow movement like that of a person on hands and knees” rather than “a slow but persistent increase, elevation, or change”:

They are calling it the Christmas Creep. This is not, one must hasten to add, a new form of dance step; it is the description being applied to traffic conditions to-day in the streets of Central London.
— The Irish Times (Dublin, Ir.), 23 Dec. 1958

In fact, Christmases aren’t the only intangible nouns that creep. We define mission creep as “the gradual broadening of the original objectives of a mission or organization,” a use that dates to the first Gulf War. Lifestyle creep involves developing more expensive tastes and habits as one’s income grows over time, to the detriment of retirement savings. Scope creep is what happens when too many new elements or goals prevent the success of a project. And feature creep is what happens when too many additions to a program or game end up changing something that is fun or easy to use into a chore or a confusing mess.

That could never describe Christmas, could it?