Cherpumple sounds like a word from a story by Lewis Carroll, who is best known for writing Alice's Adventures in Wonderland and Through the Looking-Glass. He is also known for his portmanteaus, including chortle (which combines chuckle with snort and means "to laugh or chuckle exultantly") and galumph (a blend of gallop and triumphant that means "to tread heavily"). As you can probably tell by the examples, portmanteau (which is also the name for a large suitcase) refers to a single word into which more than one word has been packed, much like the way a number of things are packed into a suitcase. Cherpumple is a modern example of one. 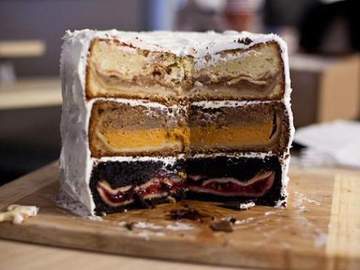 Hope you saved room. A lot of room.

A cherpumple itself is a type of dessert consisting of pies baked in cake batter and then stacked and frosted, and its name comes from the pies inside: cherry pie ("cher-"), pumpkin pie ("-pum-"), and apple pie ("-ple"). The inventor of the dessert, and its name, is American pop culture humorist and chef Charles Phoenix. Here's what the chef has to say on the origin of this delectable behemoth on his webpage:

The inspiration for the Cherpumple came from the typical dessert table selection you would find at one of my family's holiday celebrations. Seems like there's always cherry, pumpkin and apple pies and a cake—a family tradition. The cake has a layer of spice and a layer of yellow. Since I always want to have a piece of each of the pies and the cake, I figured, why not make that waaaaaaaay more convenient? So, I baked them all together as one, and the Cherpumple was born.

Phoenix's online recipe calls for cherry pie baked in white cake, pumpkin pie in spice cake, and apple pie in yellow cake. However, other creative combinations have been served as a "pie-in-cake" dessert, including the "cherbluple," which contains cherry, blueberry, and apple pies. As epicurean logophiles, we are certainly interested in unique flavor combinations; however, we're slightly more interested in the portmanteaus that are created out of the names of the pies packed inside.

Piecaken is another word for pie-in-cake creations that was added to the dessert menu shortly after cherpumple.

Piecaken is one of the hottest food trends this holiday season. Piecaken consists of a pie baked within a cake. But while the piecaken may be a huge hit, it's also a slight knock-off of a dessert invented in 2008 by Charles Phoenix.
— CBC Radio, 26 Nov. 2015

The head-scratching attachment of the "n" (what's wrong with the compound piecake?) might be influenced by turducken, the name for a boneless chicken stuffed into a boneless duck stuffed into a boneless turkey that originated in the early 1980s. If that's the case, we can't say piecaken is a portmanteau unless the turducken is incorporated into the dessert. We prefer to keep our dinner courses separate.

Whether you're served a slice of cherpumple or another version of a piecaken, you'll be sampling two, three, four, five, six, or more desserts on one plate. It sounds like a lot, but really it's just one slice. (Okay, it's a lot.)