You know us, always caping for new words

It's not really a surprise, given the number of (fictional) superheroes out and about: though not all superheroes wear capes, as the saying goes, capes seem to be making significant inroads into the culture at large. Linguistically, that means functional shift. In other words, cape isn't just a noun anymore. It's also a verb:

But to say that Mark Jackson deserves more credit than either of them for the Warriors’ current success is an obvious fallacy…. Stephen A. Smith is caping for his friend instead of offering cogent analysis….
— Kevin Draper, Deadspin, 3 Dec. 2015

"I can't believe I'm out here caping for a politician," she [Mindy Isser, union organizer] joked, a few dozen houses in on Election Day.
— Aubrey Whelan, The Philadelphia Inquirer, 15 Nov. 2017

As someone who doesn't mind change in comics, it would be nice if the same people who caped for the "Black Panther" trailer would react the same way when "Black Panther" titles—or other comic books featuring more soulful superheroes—come out in the future.
— Craig D. Lindsey, The News & Observer (Raleigh, North Carolina), 23 June 2017 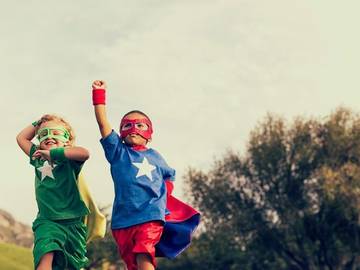 It's most often used with for, as in the above examples. Sometimes up is included:

For weeks I've been caping up for Blount, believing that he had the kind of touchdown upside that would keep him viable.
— Marcas Grant, NFL.com, 18 Dec. 2017

As these examples show, the word typically means "to defend or show support for." It evokes the image of someone donning a cape to come to the aid of one being unfairly criticized or attacked, but often people are accused of caping for someone unworthy of such valor. It's common on Twitter, where examples can be found as far back as 2009:

I done a good deed today. This helping people make their lives better pish is simply not becoming of me. I've a reputation! Off #caping now.

Look at you caping for your hometown guy lol

[update: As a commenter pointed out to us, this use of the word cape most likely has its genesis in the 1993 song "Captain Save-a-Hoe" by rapper E-40, in which the eponymous "Captain" (equipped with a metaphorical cape) is eager to save or rescue (and thereby win the loyalty of) a woman.]

Cape functions as a verb in a few other situations as well. Sometimes it's about donning a cape with no superhero aspirations:

Nearly positive now that I need a cape, for shows and also just caping around. http://tinyurl.com/d55evp

And hunters know the verb cape as the word for what a hunter does as a first step toward memorializing prey as a trophy: caping a deer is removing the head and the hide down to the shoulders:

Following up the deer harvest with a seminar on caping for taxidermy with the Kansas State University students.... http://t.co/XKW6sG7EPF

None of these are related to the oldest verb cape, which is too obscure for the dictionary at Merriam-Webster.com but is included in Merriam-Webster Unabridged, where it's defined as "to attract and direct the charge of (a bull) by flourishing a cape."

We're betting that the new cape attracts more attention than that one in coming years.