No, it's not a coiffure trend

We recently noticed an unfamiliar (and direful) term: bluebearding.

Although the sinister elements [of the novel] may begin on the pale side, they soon suggest all sorts of gaslighting and bluebearding. When the rich man first meets the teacher on an airplane, he strokes a lock of her blond hair and says: “So beautiful. Don’t ever cut it.” Later, seemingly out of the blue, he buys her a house. And he insists that their honeymoon destination be a surprise.
— Jacqueline Carey, The New York Times, 23 Feb. 2018

It's paired in this recent quote with gaslighting, and the two words have a certain kinship. To gaslight someone is to make that person believe that they are going insane, usually by subjecting them to a series of experiences that have no rational explanation. That word is taken from the name and plot of a 1938 play, but gaslighting as a term in popular use is really a child of this century.

Bluebearding may be stepping in to join it. The story of this word begins with another story. 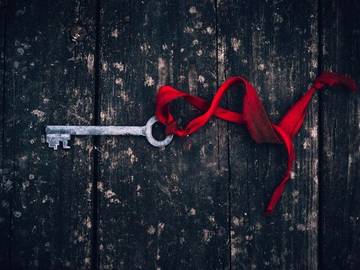 In its extended use, the verb 'bluebeard' might mean "to seduce and then reject one woman after another."

It's one of the more disturbing narratives in Tales of Mother Goose. Bluebeard (whose beard is blue, though we know not why) is rich and important and recently married. He leaves his new wife with the keys to all the doors in his castle while he goes away for a bit, forbidding her to open a specific one. Her curiosity is a powerful force, naturally, and she opens the forbidden door to find the bodies of wives who preceded her. Bluebeard returns to find a spot of blood on one of the keys, deduces that his wife has discovered his heinous crimes, and threatens to punish her (by death, of course) for her disobedience. She's saved by her brothers just as Bluebeard is about to strike the fatal blow.

This version of the story is originally French: Charles Perrault's La Barbe bleue was published in Contes de ma mère l’oye in 1697; that book was translated into English in 1729 as the book that English speakers know as Tales of Mother Goose. Perrault was not the originator of the gory tale, however. Similar stories exist in European, African, and Eastern folklore, with the locked and forbidden room, the wife's curiosity, and the just-in-time rescue being the common elements.

The character of Bluebeard long ago lent himself to the English language in the form of a noun Bluebeard (which is also styled as bluebeard). It means "a man who marries and kills one wife after another," and earliest known print use currently dates it to 1795.

While history is lightly spattered (sorry) with awful literal Bluebeards, the word has occasional use that is much milder. In these cases, a bluebeard is more philanderer than murderer:

Larry was something of a Bluebeard, and, may I say, a lucky dog while his luck held out. Edith, Janice, Beatrix, and Ellen—the most recent group of graduates—loved and were loved in turn. And, in turn, given the axe.
— Kurt Vonnegut, "Little Drops of Water," story in Harper's, June 2009

Use of the verb bluebeard treads territory of both the ghastly and the merely cruel, and spans about a century and a half:

Our two protagonists are the two Charlies—Teresa Wright is a moody teenage girl, doting on her namesake Uncle (Joseph Cotton) who graces the family with an extended visit. During his stay, the girl gradually comes to recognize that he is actually a serial killer who’s been Bluebearding his way through a litany of lonely widows whom he seduces, marries, and murders. Oops.
— David Kalat, Streamline (streamline.filmstruck.com), 27 Oct. 2012

He … then began to ask me agitated questions about proposing. He deferred to me as though I had spent my whole life Bluebearding through the social system. He wanted to be coached how to do to it, you know. I told him to rip out the words—any old words—and then kiss her.
— Lloyd Osbourne, The Motormaniacs, 1905

In its meaning most true to its literary origins, it means "to marry and kill one wife after another"; in its less prosecutable use it means something like "to seduce and then reject one woman after another," though evidence is scant enough that this meaning is wholly preliminary as far as your dictionary is concerned.

Whether (and how) the verb becomes established is up to English speakers.