Traditionally, cadence has to do with rhythm—the rhythm of music, of a person's voice, of sounds in nature. As our definition shows, the word has long had other applications as well, mostly still having to do with sound. 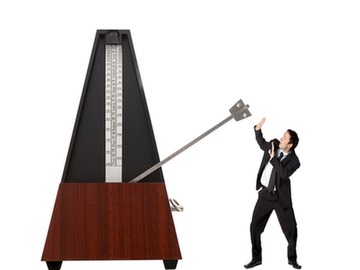 'Cadence', in business-speak, is how often a regularly scheduled thing happens.

In the business world, though, the word has developed a meaning that has to do not with audible rhythms, but with the rhythms of business:

Apple's yearly product launch cadence generally means a big spike in interest, with a gradual falling off until the next major device launches. — Ashraf Eassa, The Motley Fool (fool.com), 15 Feb. 2016

Cadence, in business-speak, is how often a regularly scheduled thing happens.

Nancy Friedman, writing at Vocabulary.com, speculates that the usage may have gotten its start at IBM. She cites a 2003 article about the company that referred to the "cadence of meetings" at IBM (when and for how long particular categories of employees have meetings), and described the term as "IBM language."

The use has spread well beyond IBM, and is not limited to meetings:

The contract is a major catalyst for the U.S. [satellite] launch industry, providing consistency for a sector where long-lead times can drive up costs without a regular mission cadence. — Satellite Today, 19 Jan. 2016

It's also important that the governance processes and mechanisms are in place, they make sense to you and they fit what you are trying to accomplish. This includes a regular cadence of meetings … — David Tilk, PM Network, 1 Jan. 2016

If you're a businessperson who bikes to work, you may spend your morning commute thinking of the cadences that guide your professional activities at the same time as you stay aware of your cycling cadence—that is, how fast you're pedaling:

As we begin to climb the first sustained hill on our 17-mile ride our speed drops significantly, my cadence slows … — Kyle Bryant, The Huffington Post, 18 Dec. 2015

This sense of cadence (broadly covered by sense 1b of the definition, "the beat, time, or measure of rhythmical motion or activity") is also used of the pace of runners and swimmers:

… the swimmer’s arms lift and glide under the surface in a reliable metronomic cadence … — Diana Nyad, Sports Illustrated, 2 Nov. 2015

So it's not such a reach to use cadence to describe business activities—in fact, those who do are just keeping in step with everybody else.