When you're swole, you're ripped.

If someone said you were swole, would you know how to respond? If you're unfamiliar with the word, you might think your face is swollen or check yourself for signs of puffiness. If you know the word, however, you'd know you're in fact looking quite fit and muscular and might respond with a simple "Thank you for noticing." Often bandied about on social media, swole has come to be a complimentary term for those with a physique enhanced by weightlifting and bodybuilding exercises. 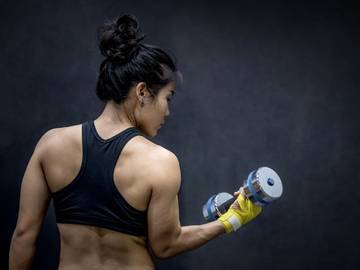 'Swole': when you DO even lift, bro

The word isn't exactly new, however, since swole goes back to Middle English as a past tense and past participle of swell meaning "to distend," "to enlarge," "to bulge," or "to puff out" (literally and figuratively).

As to a stomach starved, whose insides meet / Meat comes, it came; and swole our sails, when we / So joyed, as Sara her swelling joyed to see.
— John Donne, "The Storm," 1597

During the 19th century, swelled and swollen began taking over as the more popular past forms of swell, but by then swole established itself in dialectal American and British English.

But sir, this splinter didn't seem to have no energy in it. It thess lodged there, an' his little foot it commenced to swell, an' it swole an' swole tell his little toes stuck out so thet the little pig thet went to market looked like ez ef it wasn't on speakin' terms with the little pig thet stayed home.
— Ruth McEnery Stuart, Sonny, A Christmas Guest, 1899

The first policeman here appealed to the manager, begging the gentleman to just pass his hand lightly across the back of his neck and see if it wasn’t "swole." The manager did so, and agreed that the neck at the glands seemed a trifle enlarged….
— Keble Howard, The Peculiar Major, 1919

When we got out of the truck and hurried to her, I seen her face was swole up worse than it looked at first. Her lip was swole sideways.
— Robert Morgan, This Rock, 2001

He got all swole up the way unimportant people do when they're trying to be important….
— Ed Gorman, Save the Last Dance for Me, 2002

Arkansas-born Bill Clinton didn't hesitate to use the word in a 1999 speech when he was POTUS. Speaking of a police subsidy, he said that those who were opposed to it had "practically swole up and died when it was passed."

In the late 20th century, swole gained new meaning in bodybuilding culture. Specifically, it came to mean "extremely muscular" or "having well-defined muscles." Rapper Ice-T used the adjective in his 1991 song "The Tower": "And hit the weight pile / The brothers was swole / The attitudes was cold." In addition, it was applied as a verb to describe becoming ripped or cut, as when the late Tupac Shakur in his 1997 song "When I Get Free" raps "did push ups till I swole up."

Although this sense of swole has connections to rap and hip-hop culture, it tends to get most of its use from gym rats in general as well as writers on fitness.

Black Mountain Product's super light-weight resistance bands range from 2-4 pounds to 25-30 pounds of resistance—perfect whether you're recovering from an injury or looking to get swole.
— Kelli Kennedy, The News Journal (Wilmington, Delaware), 7 Dec. 2017

The flexing of swole in both social media and journalistic writing has caught our attention, and it looks to be a fit addition to our dictionary. On the other hand, the stamina of its spin-offs, such as swelfie, swoldier, and swolemate, is iffy.

The community of users also rates favorite workouts, so you’ll always know what people are finding to be effective, and you can show off all that hard work with a post-workout "Swelfie." (That's a swole selfie.)
— Ben Radding, Men's Health, 15 Nov. 2016

We asked some of our favorite swolemates (that's internet speak for soul mates who like to get swole, as in muscular or swollen, together) about the creative ways they sneak in a workout and how it has improved their relationships.
— Kelli Kenney, The Chicago Tribune, 1 Aug. 2017

We'll see. There is also swoleiosis, the least-used swole derivative, referring to the (not exactly serious) condition of being swole to the nth degree. Perhaps more people will come down with it if swole continues to pull its weight, but in the meantime we'll be here spotting it.