The Declassified History of 'Security Blanket'

In the American cartoon strip Peanuts, creator Charles M. Schulz's character Linus van Pelt carries around a blanket wherever he goes for comfort. Today, we refer to such an object as a "security blanket." The emergence of that sense of the term is contemporaneous with the first appearance of Linus with his blanket in 1954. That fact combined with the popularity of the Peanuts led many people to credit Schulz with the coining of the term. However, it can only be said that Schulz helped popularize a new sense of security blanket, since it was already being used in meanings much different decades before. 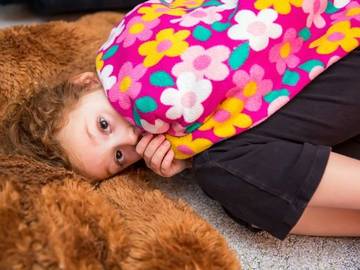 "See? You just sort of scrunch your face into it, and right away you feel secure."

In the 1920s, a security blanket was a blanket that was placed over a sleeping child and fastened by clips. Although the security blanket did, indeed, secure the little one—essentially, strapping him or her to the bed—the anchored blanket was designed so that in the event that the child became restless, he or she would remain snugly covered. Needless to say, this security blanket is now considered medieval.

During World War II, the term security blanket was enlisted into U.S. military jargon and referred to any measures or sanctions taken for security purposes, but especially to those for keeping military information secret. We are not privy to how this sense came about in the armed forces, but the notion of keeping something covered up with a blanket (held by "security blanket fasteners") comes to mind, and during wartime, security implies the maintenance of secrecy as well as cover. After the war, the sense continued to be used generally for any type of secrecy, and it is often encountered in politically charged contexts.

A security blanket cannot be maintained indefinitely on scientific developments—the British and Russian test explosions have proved that no one country can have a monopoly of atomic knowledge, however carefully its secrets are guarded.
— New Commonwealth, 1953

The existence of this simulator—ten times the size of any other yet built—is one small indication of how much work on missiles is actually being achieved in this country, even though it is still done under a security blanket that irritates.
—The Economist, 1954

Moreover, the end of the Cold War has sharply reduced the importance of U.S. military might for Europe and pulled aside the security blanket that often allowed both sides to cover up or resolve their economic disputes for the greater good of preserving the anticommunist alliance.
— Foreign Affairs, March/April 1999

Postwar, it also continues to serve as a word for armed protective security measures.

It's a very powerful military alliance, and before we extend NATO, move it out, make that security blanket effective in other countries, I think the other countries are going to have to demonstrate that they can contribute to NATO.
— Warren Christopher, speaking on PBS, 16 Dec. 1993

She would have been unaware that private security guards … were not capable of giving her the total security blanket that Scotland Yard had done.
— People, 2, Sept., 2002

His nukes are not some sort of security blanket. They are his actual security.
— Richard Cohen, The Washington Post, 24 May 2018

It is in June of 1954 that Linus makes an appearance in Schulz's cartoon holding his blanket securely. In October of that same year, the Peanuts character Charlie Brown, wearing his signature zigzag shirt, is also depicted with a blanket and tells Linus's sister Lucy, who unsurprisingly interrogates him (she does run a psychiatry booth, after all), that it is "a security and happiness blanket" that "all little kids carry." He goes on to say, "They're just the thing to have when you're tired and discouraged. See? You just sort of scrunch your face into it, and right away you feel secure." Notably, Schulz does not have Charlie Brown say "security blanket," even though it is quite possible that he would have encountered the term: the earliest known print evidence of it in the sense of "a blanket carried by a child as a protection against anxiety" is also in late 1954. In addition, he was a World War II veteran and may have been familiar with its military use.

Oxford English Dictionary Editor John Simpson wondered about such connections and wrote to the creator of Peanuts in regard to the origin of security blanket. In a November 6, 1981 reply, Schulz doubts that he ever used the term, and he suggests that his readers may have coined it:

In the Peanuts strip, Linus held a blanket and he and the others discussed the security of holding the blanket, but I think that it was the readers who eventually coined the phrase "security blanket." It is, therefore, impossible for me to date the origin of the term.

The contemporaneity of the blanket-carrying Linus and Charlie Brown's description with the emergence of security blanket in the English lexicon leaves us wondering if Schulz did, in fact, influence the coinage of the term. What can be said with certainty is that he helped familiarize people with the concept of children having a security blanket as a protection against anxiety.

Most people have their own version of Linus's security blanket—something (or someone) that gives them peace of mind and is kept close at hand. It seems that intimate connection led people to use the term Linus blanket as a synonym of security blanket shortly after the debut of Linus drawn with his comfort object—and we can certainly credit its formation to Schulz and his readers.

The term has been used sporadically since the late 1950s, and it still pops up now and then.

Staff members have swapped out a new encrypted phone for his Android cellphone—his electronic Linus blanket—which had hundreds of numbers of associates from whom he seeks advice.
— Maggie Haberman and Glenn Thrush, The New York Times, 20 Jan. 2017

Most presidents have needed a kind of Linus Blanket—the thumbsucking symbol of security carried around by the Peanuts comic character. John Kennedy had Keeny O'Donnel and Bill Clinton had Bruce Lindsey, friends and confidantes who had the sense not to overplay their access to the president but who were always available if the president needed a gut check.
— Matthew Cooper, Newsweek, 13 Apr. 2017

It's a credit to Schulz that this allusion to Linus's blanket has semantic meaning today. We're holding on to our Linus blankets and wishing it to maintain its presence in the English language.