'Tiddleywink': A Game, A Bar, And A Drink

A silly-sounding word with a lightly sordid past

Tiddleywinks (also spelled tiddlywinks) is a Victorian children's game that involves launching small coin-shaped disks (called "winks") from a flat surface into a pot—and, yes, it's like beer pong. The game was originally played in a plush parlor among parents and their children; however, earlier evidence of the game's name refers to an unlicensed public house selling beer or hard cider (which also often functioned as a brothel or pawnshop).

She is generous of pious tracts, that find their way to an office of exchange, where they are bartered for a quatern of gin within half an hour after the precious gift has been bestowed. We knew a proprietor of one of these wayside marts—in plain terms a "tiddlywink" where poachers congregated, and flash men came to make inquiries about the architectural contrivances of the neighboring mansions….
— Bailey's Magazine of Sports and Pastimes, October 1863 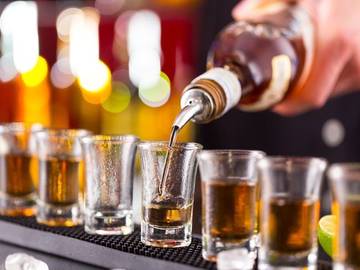 What we call a 'shot' was once a 'short,' which may have influenced the formation of 'tiddleywink.'

Around the same time, the base word tiddly came to be used in slang for an alcoholic drink; later, that sense developed into a euphemism for being drunk.

… egged on by two Franciscan friars who kept him well fueled with cognac and whiskey. (Pagliacci, a two-fisted drinker, says he does his best painting when slightly tiddly.)
— Time, 25 June 1951

… an ill-advised mixture of goat's milk, schnapps, and a botanically unidentified berry. The consumer becomes a little tiddly and given to giggles without hangovers.
— Newsweek, 20 Apr. 1953

Etymologists believe that tiddly is either dialect or baby talk for the word little; similarly, the word tiddy is used as a synonym of little. Tiddly—essentially meaning "little drink"—then combined with wink—in the sense of "a very short amount of time" (as in "I haven't slept a wink")—through rhyming slang (wink rhyming with drink) to form a word implying a quick drink at the pub or bar. Quite possibly, the word's formation was influenced by short in reference to small amounts (or drams) of liquor—nowadays, we call a "short" a "shot."

Saveloys, with a pint of beer, or a glass of "short" (neat gin) is with them another common week-day dinner.
— Henry Mayhew, London Labour and the London Poor, 1851

So how did tiddleywinks get invited into the Victorian parlor room? That is a mystery, but a clue might be its use as a variation of the game of dominoes. Perhaps—just perhaps—that game was brought into the domestic sphere in a different, "clean" form. But, honestly, given the morale of Victorian society, that's unlikely: the game's name probably has something to do with the "little" counters used in playing it.

But then there's the earlier word kiddleywink. In certain dialects, that word similarly referred to public houses. An article in the December 1830 issue of the Royal Cornwall Gazette mentions that kiddleywink was being applied to "new beer shops" and the designation is from a person named "Kidley Wink." Tiddleywink could very well be an alteration of kiddleywink, but that's a tidy etymology and word origins are hardly ever that clear-cut.

What we can say for certain is that in the 19th century the game of tiddleywinks was exciting:

After dinner we all played the most exciting game that ever was invented, called Tiddleywinks. It consists of flipping counters into a bowl, and being a good number we played at two tables, one table against another, and the excitement was tremendous. I assure you that everyone's character changes at Tiddleywinks in the most marvellous way. To begin with, everyone begins to scream at the top of their voices and to accuse everyone else of cheat. Even I forgot my shyness and howled with excitement ... I assure you, no words can picture either the intense excitement or the noise. I almost scream in describing it.
— Lady Emily Lytton, letter, 24 April 1892

And that in the second half of the 20th century this children's game was taken over by university students who transformed it into a complex competitive game of strategy and manual dexterity … as well as luck.

An Oxford University tiddler … says there's a 100-year-old controversy over proper spelling of the sport. The Cambridge team members, who call themselves The Contab Winkers, spell the name T-I-D-D-L-Y-W-I-N-K-S. The dictionary agrees. But Oxfonians, playing under the name The Oxonian Tiddlers, spell the name "T-I-D-D-L-E-W-I-N-K-S." Among other points of the controversy is the use of two sets of rules for the game. One set emphasizes manual skill and dexterity. The other emphasizes tactics.
— The New York Times, 9 May 1958

This modified game of competitive tiddleywinks began at Cambridge and Oxford University and migrated to the United States—in particular, to the Massachusetts Institute of Technology and Cornell University. Although collegiate team competition has since dwindled, the game and versions of it are still enjoyed as pastimes. So, responsibly of course, have a few tiddlies, get tiddly, and play a round of tiddleywinks. Or beer pong. It's up to you.